Nepal's 19th-century nine-storey Dharhara tower in the heart of the capital on Saturday became a burial ground for hundreds of visitors who had come to see the panoramic views of the Kathmandu valley from the top of the minaret.

The 50.5-metre-high historic tower was reduced to just its base after a powerful earthquake measuring 7.9 on Richter scale struck Nepal flattening the minaret and trapping hundreds of visitors under its debris. 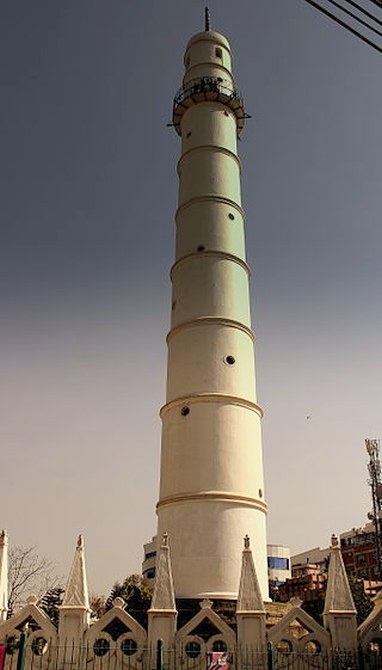 The Dharahara tower before the earthquake. Photograph: Wikimedia Commons.

At least 200 bodies have been retrieved from the rubble so far, the 0police said, adding that several people were still trapped under the debris. Rescue workers were seen retrieving bodies from the debris and the people on the spot desperately tried to dig through piles of bricks and dust with their bare hands.

The tower -- which was white, topped with a bronze minaret and contained a spiral staircase of over 200 steps -- was a major tourist attraction in the heart of the capital. It was built in 1832 by then Prime Minister of Nepal Bhimsen Thapa.

The tower was a popular attraction, with tourists charged a small fee to climb the steps to the viewing deck. The architecture of the tower was designed in Mughal and European style. A small statue of Lord Shiva was placed on the top of the tower.

Image: The Dharhara tower before and after the earthquake. Photograph: Twitter