A major terrorist plan to set off an explosion at a crowded place here on the second anniversary of the Pulwama attack was scuttled with the recovery of a powerful improvised explosive device (IED) from a nursing student who was arrested along with three others, a top police officer said on Sunday. IMAGE: CRPF personnel pay tribute to the martyrs, on the eve of the second anniversary of Pulwama attack, in Jammu, on Saturday. Photograph: PTI Photo

"Over the past four days we were on high alert because there was general intelligence input that terror groups want to trigger a major blast in Jammu city on the second anniversary of the Pulwama attack. The security around all important locations were strengthened and checking intensified," he told reporters Jammu.

Singh, who was also flanked by Director General of Police Dilbag Singh, said a youth was found moving in suspicious manner along with a bag in the general bus stand area and it led to the recovery of nearly seven kg of IED which was, however, not activated as yet.

The IGP identified him as Suhail Bashir Shah, a resident of Newa village of Pulwama, who was pursuing nursing course in a college in Chandigarh and was assigned the task to plant the IED in Jammu by his Pakistan-based handler affiliated with Al-Badr terror outfit.

"He was given four targets including (t he famous) Ragunath mandir, bus stand, railway station and Lakhdata bazar (jewellers market) and was scheduled to take a flight to Srinagar after completing his job," he said.

Singh said Athar Shakeel Khan, who is a high ranking overground worker of Al-badr, was supposed to receive him at Srinagar airport and accordingly, Khan was arrested.

"His fellow student from Kashmir, Qazi Wasim, was aware of the plan and he was picked up from Chandigarh, while their another associate Abid Nabi was arrested from Srinagar," the IGP said, adding Bomb disposal squad was investigating the IED and it is not yet clear whether RDX was used in the fabrication of the device.

However, he said timely recovery of the IED averted a major tragedy in Jammu region.

In another successful operation, he said police seized six pistols along with a large quantity of ammunition and 15 minor IEDs while patrolling in Jang area of Ramgarh in Samba district during the intervening night of February 13 and 14.

"We are investigating the backward and forward links of the consignment," he said.

The IED recovery comes close on the heels of the arrest of two top terrorists from Kunjwani in Jammu district and Bari Brahmana area of Samba district.

Zahoor Ahmad Rather, a top terrorist affiliated with The Resistance Front (TRF) who was wanted in connection with the killing of three Bharatiya Janata Party workers and a policeman in south Kashmir last year, was arrested in Bari Brahmana area of Samba on Saturday.

Earlier on February 6, self-styled commander of the Lashkar-e-Mustafa (LeM), Hidayatullah Malik, alias 'Hasnain', was held from the Kunjwani area of Jammu.

Two years ago on this day, Pakistan-sponsored Jaish-e-Mohammed carried out the dastardly attack on a CRPF convoy of 70 vehicles in Pulwama, resulting in the death of 40 jawans.

The DGP complimented the police for the alertness and busting of the terror networks, leading to the spectacular success over the past week. 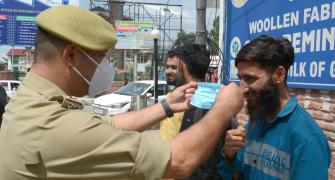