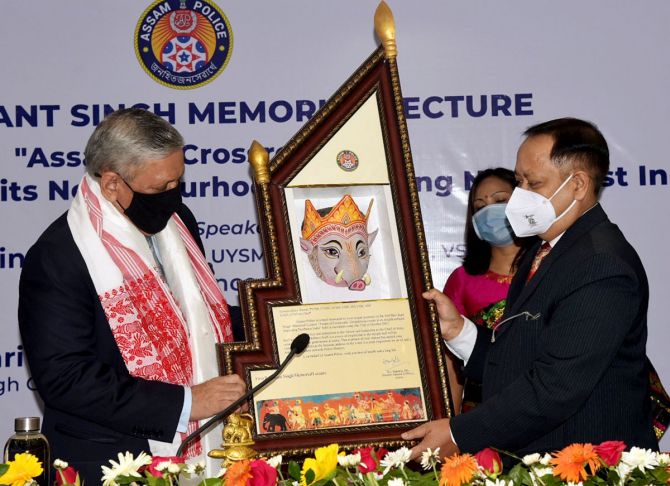 China is making 'huge' inroads in South Asia and in the Indian Ocean Region to strengthen its position as an emerging global power he said, while delivering the first Ravi Kant Singh Memorial Lecture in Guwahati.

"Of late, we are witnessing a geo-strategic competition and huge investment by China in the region to create a favourable posture to provide sufficient security to its interests," he said.

Bangladesh and Myanmar have been the largest recipients of Chinese military aid in the recent past, along with significant investments in Nepal, Sri Lanka and Maldives 'to gain strategic foothold (in the region)', he said.

He added that China's foray into Myanmar and Bangladesh are not in India's national interest as these are attempts to 'engulf India'.

The lecture was organised in memory of Ravi Kant Singh, a young Indian Police Service (IPS) officer who was killed by United Liberation Front of Asom (ULFA) terrorists in Tinsukia in Assam in the late 1990s.

"There exists an omnipresent danger of regional strategic instability," Rawat said, adding that it has the potential of 'threatening India's territorial integrity and strategic importance'.

The General also said Pakistan's state sponsored terrorism as well as by non-state actors against India is a stumbling block to peace process between the two countries.

He described the 'partnership' between Pakistan and China on a range of issues, from China providing military hardware to Pakistan and supporting it in international fora, as an 'anti-India nexus'.

Later addressing a press conference, the chief of defence staff said border issues with China have to be viewed in its totality, and not as issues pertaining to the Ladakh sector or North Eastern states.

"In 2020, there was a little bit of problem (between India and China). Issues are being resolved with talks at different levels, from military to political level," he said.

Rawat also said such issues have copped up in the past too between the two neighbours, but have been resolved.

"There are suspicions between the two countries, and hence, it takes time to resolve the issues.

"The people must have faith and confidence in the system and the armed forces," he added.

He said as a measure to counter China's influence in the region, India has to step up its engagement in neighbouring countries.

He said, "Chinese have a habit of using money power to gain popularity in a country (they are trying to influence). But as our prime minister has given a clarion call, we believe in security and growth for all."

"We have to tell our neighbours that we are here as permanent friends and engage with them on equal terms and we consider all neighbours as equal partners in development," he added.

Rawat also emphasised on the need to exploit cultural linkages with the neighbouring countries to strengthen ties.

On the country's defence preparedness, Rawat said, "We are standing strong."

He said there is adequate defence and arms systems at India's disposal, and the government has allowed the armed forces to procure needed armaments by invoking emergency powers.

"No questions are being asked (by the government) as long as our security mechanism improves," he added.

He also said the killings in Jammu-Kashmir were an attempt by the neighbouring country to spread fear among the people.

"We should not fear them or fall prey to such traps," he said, adding that any possible exodus of people from J-K should be stopped.

To counter Pakistan's designs, the chief of defence staff said the intelligence network is being strengthened.

Rawat added that the freedom of movement that people in Jammu-Kashmir were starting to enjoy in recent times may be disrupted due to the current situation and urged for people's cooperation in tackling the situation.