The United Kingdom's health authorities have confirmed that a new and 'most significant' variant of COVID-19 is officially under investigation in the country as the World Health Organisation categorised it as a 'variant of concern' and named it Omicron. 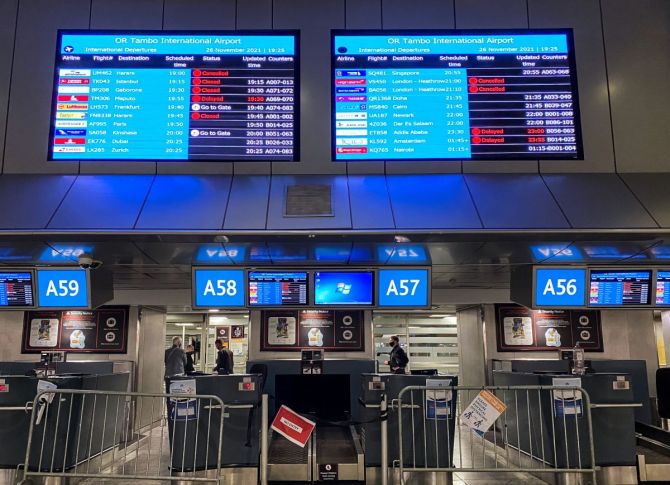 The move came soon after Belgium confirmed a case of the B.1.1.529 variant in someone who had travelled back from Egypt earlier this month, with the European Union (EU) member states agreeing to a snap travel ban on seven African nations.

It follows the UK government's move adding six countries to its travel ban red list from southern African, where B.1.1.529 was first identified.

Travel restrictions will apply on arrivals from South Africa, Botswana, Lesotho, Eswatini, Zimbabwe and Namibia starting Friday, as the government reiterated that no cases of the new mutation had been detected in the UK so far.

In Europe, Germany, France, Italy, the Netherlands, Austria, Belgium, Malta and the Czech Republic are among the countries resorting to stricter restrictions on travel and even lockdowns amid an already worrying spike of COVID-19.

Meanwhile, the UK recorded another 50,091 coronavirus infections and 160 COVID-19 deaths on Friday.

According to the UK Health Security Agency (UKHSA), the new variant includes a large number of spike protein mutations as well as mutations in other parts of the viral genome which could potentially be more transmissible and evasive to vaccine immunity.

'This is the most significant variant we have encountered to date and urgent research is underway to learn more about its transmissibility, severity and vaccine-susceptibility,' said Dr Jenny Harries, UKHSA Chief Executive.

'The results of these investigations will determine what public health actions may limit the impact of B.1.1.529. This is a clear reminder to everyone that this pandemic is not over, and we all have a responsibility to do what we can to limit transmission and reduce the infection rate and prevent the emergence of new variants,' she said.

The UKHSA said B.1.1.529 has potentially biologically significant mutations which may change the behaviour of the virus with regards to vaccines, treatments and transmissibility, and therefore more investigation is required.

'As part of our close surveillance of variants across the world, we have become aware of the spread of a new potentially concerning variant, which UKHSA has designated a variant under investigation,' UK Health Secretary Sajid Javid said.

'We are taking precautionary action to protect public health and the progress of our vaccine rollout at a critical moment as we enter winter, and we are monitoring the situation closely,' he said, adding that some experts fear it may turn out to be more highly transmissible than the Delta variant -- currently the predominant COVID variant in the UK.

He told the House of Commons that the B.1.1.529 variant had 'an unusually high number of mutations' and it was a possibility that it had already spread from South Africa and Botswana, where confirmed cases have been found, to other countries.

'One of the lessons of this pandemic has been that we must move quickly, and at the earliest possible moment. We're heading into winter and our booster programme is still ongoing, so we must act with caution,' he said.

The new variant is believed to have as many as 50 spike mutations.

Spike proteins are what viruses use to get into human cells, and some vaccines work by training the body to recognise the spikes and neutralise them.

Mutations on the spike in a virus could therefore prove problematic in containing its spread.

From midday on Friday, non-UK and Irish residents who have been in the six African countries in the previous 10 days will be refused entry into England.

A temporary ban on commercial and private planes travelling from the six countries will also come into force at midday on Friday until Sunday to reduce the risk of importing the new variant under investigation while hotel quarantine is stood up.

'We're taking this early precautionary action now to protect the progress made across the country, and will continue to keep a close eye on the situation as we continue into the winter,' UK Transport Secretary Grant Shapps said.

The European Union (EU) has also followed suit with similar action and European countries also put their action plans in place against the new variant.

'The EU Commission will propose, in close coordination with member states, to activate the emergency brake to stop air travel from the southern African region due to the variant of concern B.1.1.529,' Ursula von der Leyen, European Commission President, tweeted on Friday.

The first genomes of the new variant were uploaded to the GISAID, a global science database, on November 22.

Genomes have now been uploaded from South Africa, Botswana, Hong Kong and Belgium but the extent of spread is not yet determined.

In South Africa, Health Minister Joe Phaahla said 'there has been more of an exponential rise' in cases over the last four or five days.

Until recently, the country had been reporting about 200 confirmed cases per day -- but this has rapidly increased over the past week, hitting 2,465 on Thursday. 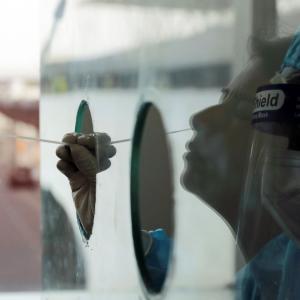