As the unrest in Kashmir entered 43rd day, leaders of opposition parties from Jammu and Kashmir led by Omar Abdullah on Saturday knocked at the doors of President Pranab Mukherjee, requesting him to urge the Centre in finding a solution "politically". 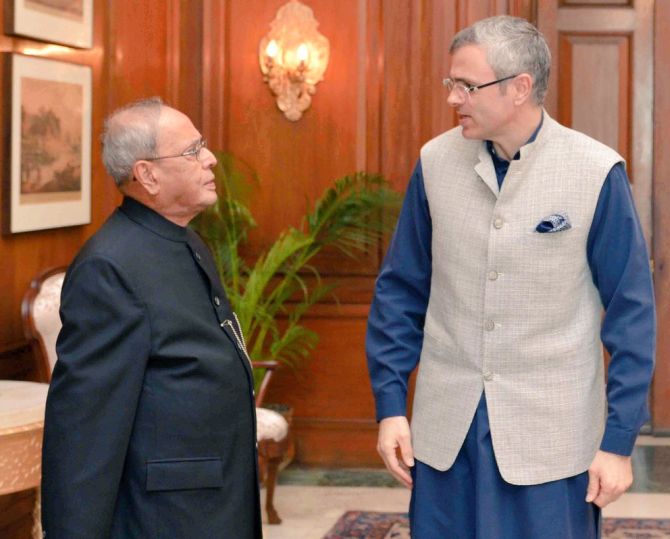 With no signs of peace returning to the Valley, Omar, working President of National Conference and former chief minister, hit out at the Modi government for its "failure" to acknowledge that the issue in Kashmir is largely of a political nature.

The opposition delegation while seeking the President's intervention also submitted a memorandum and apprised him of the "worsening" situation in the state.

Omar said the delegation also requested the President to use his "influence" on the state as well as the Centre "to stop the use of lethal force against civilians in the Valley".

"The failure of the central government to acknowledge that the issue in Kashmir is largely of a political nature has worsened the already volatile situation," Omar told reporters after an hour-long meeting with the President.

"We have requested the President to impress upon the central government to initiate a credible and meaningful process of political dialogue without any further delay involving all stakeholders to address the political issue in the state," the NC leader said.

The 46-year-old former chief minister, who had held a meeting of all opposition parties in Srinagar earlier this week, said the situation cannot be handled administratively or by creating a humanitarian crisis.

"You see, we are having curfew for last 43 days. Now sale of petrol has been stopped which means it will also affect movement of ambulances. With stringent curfew measures being enforced, more and more people are being driven out onto the streets and the problem is getting worse," Omar said, adding having further restrictions placed on them only increases their misery.

It would also be meeting leaders of other political parties including Vice President of Congress Rahul Gandhi and CPI-M General Secretary Sitaram Yechury.

Omar said the continued refusal of the Centre to deal with the situation through a political approach "is disappointing and can have serious long term implications on peace and stability in the state".

"I wonder when would they wake up as the situation is grave," he said, alleging that the state and central governments were trying to "crush the agitation by using administrative measures".

Blaming Mehbooba Mufti-headed PDP-BJP government for having failed on all fronts to normalise the situation, Omar said the Chief Minister was directly responsible for the deteriorating situation.

The former chief minister, who was also accompanied by senior leaders of NC including provincial Presidents of his party Nasir Wani and Davinder Rana, Ali Mohammed Sagar and A R Rather, said, "The fire that has been raging in Kashmir Valley has already started spreading across Peer Panjal and Chenab Valley in Jammu region and Kargil area."

Omar said the meeting with the President, which cuts across party lines, symbolised the deep concerns about the prevailing situation and also their disappointment at the way the matter has sought to be handled, both by the Centre as well as the state government.

"Similarly, if any moves have been made in the state government, it only followed from opposition pressure and not as an initiative of the government," he said.

Omar warned that a "continued delay to engage with the people of the state through a comprehensive and sustained political initiative will further deepen the sense of alienation in the Valley and cast a shadow of uncertainty on its future generation".

He said the delegation also requested the President to use his "influence" on the state as well as the Centre "to stop the use of lethal force against civilians in the Valley".

Omar, however, made it clear that there was no demand for imposition of Governor's rule. "We have not come here to overthrow the government, even though the Mehbooba Mufti government is responsible for the deteriorating state.

"Her administrative capabilities have continuously failed and so has her ability to deal with the situation. It's administrative anarchy in the state. One ruling is announced in the morning and by evening, another," he said.

Asked whether blaming Pakistan for the current crisis in the state was correct, Omar said, "look what happened immediately after killing of Burhan Wani (Hizbul Mujahideen militant on July 8) had nothing to do with Pakistan which stepped in later only to pour more petrol in the fire that was raging in the Valley."

To a question about the Centre's assertion to bring back areas of Kashmir under illegal occupation of Pakistan, he said, "if they can, let them. I am not here to comment on the foreign policy of the government.

"I am here because my house (Kashmir Valley) is on fire and I need immediate attention before this fire spreads."

Flagging the issue of use of pellet guns that resulted in grievous injuries to people, he said problem was that the guns were being given to people who did not know how to use it.

"I'm stunned that 1.3 million pellets were used against our people. If such power and force had been used in any other state in our country, would people remain silent? When such things happen in Jammu and Kashmir, people don't seem to care.

"Not only is the problem with the use of the pellet guns, the problem is that those guns are being handed over to those people who are not adequately trained in the use of weapons," he said, adding "it is not just the use of the weapon. Any weapon is a lethal weapon. It depends on how you use it."

Tarigami told the President that there was an uprising in the Kashmir Valley and if it was not handled with care, it will not only engulf the entire country, but the entire subcontinent. 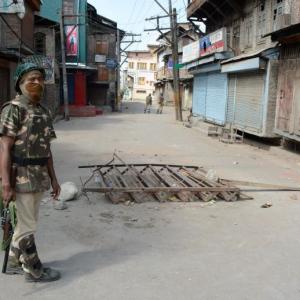