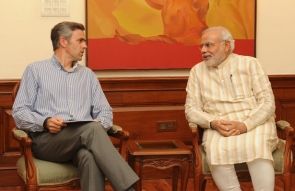 Jammu and Kashmir Chief Minister Omar Abdullah on Tuesday called on Prime Minister Narendra Modi and sought a special rehabilitation package from the Centre for the flood-ravaged state.

Pitching for liberal assistance from the Centre, Omar told the prime minister that such a package was necessary for putting life back on rails in the state.

Thanking the prime minister for timely assistance by way of rescue efforts and immediate relief to the affected people, Omar told Modi that the state was looking up to the Centre "in this hour of grave crisis".

"Our hearts go out to the families who have lost their dear ones," Omar said, adding the loss to property has been colossal in this calamity.

"We look up to you in this hour of grave crisis for all the required support in the second phase of calamity management in terms of rehabilitation of the affected families both in terms of housing and livelihood besides permanent restoration of public assets," Omar was quoted in an official release as having told the prime minister.

He said while the state government will immediately role out financial assistance to affected families from out of State Disaster Relief Fund, a liberal and pragmatic financial package needed to be worked out for permanent and sustainable settlement and rehabilitation of households devastated by the floods.

"Considering that the residential houses in Kashmir are built at a cost much higher than in other parts of the country and in view of limited working season available before the onset of winter, it is imperative that central government agrees to the extra ordinary funds for the reconstruction of the fully damaged and partially damaged houses of the affected families", he said.

The release said the prime minister assured all central support to the state for relief and rehabilitation of affected families and reconstruction of damaged infrastructure.