National Conference vice president Omar Abdullah on Sunday claimed that he and his family members, including his father and Member of Parliament Farooq Abdullah, have been put under house arrest by authorities. 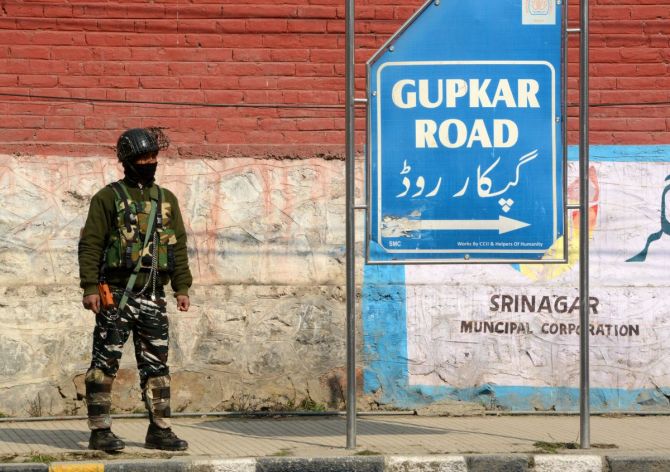 However, police said the movement of protected persons was 'discouraged' on Sunday due to adverse inputs on the second anniversary of the 2019 Pulwama attack.

On February 14, 2019, 40 Central Reserve Police Force (CRPF) personnel were killed in the attack by Pakistan-based Jaish-e-Mohammad (JeM) in Jammu and Kashmir's Pulwama.

'This is the 'naya/new J&K' after Aug 2019. We get locked up in our homes with no explanation.

The former Jammu and Kashmir chief minister also posted photographs showing police vehicles outside the gates of his residence in the Gupkar area of Srinagar. 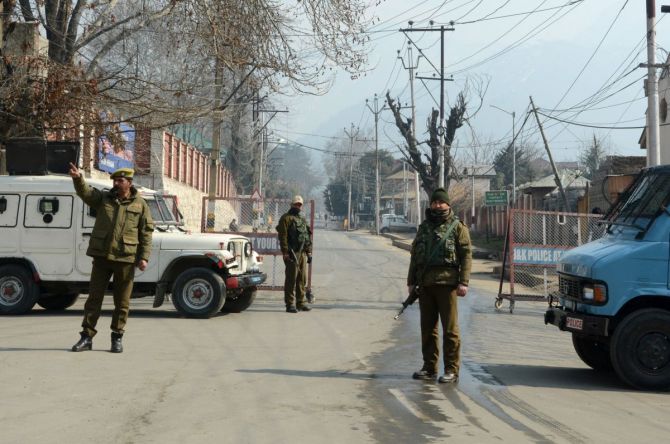 Omar also alleged that his house staff was not being let inside.

'Chalo, your new model of democracy means that we are kept in our homes without explanation but on top of that the staff that works in the house aren't being allowed in and then you are surprised that I'm still angry & bitter,' he said in another tweet.

Responding to Omar's tweets, police said the movement of protected persons and VIPs was 'discouraged' due to adverse inputs on the second anniversary of the Pulwama attack. 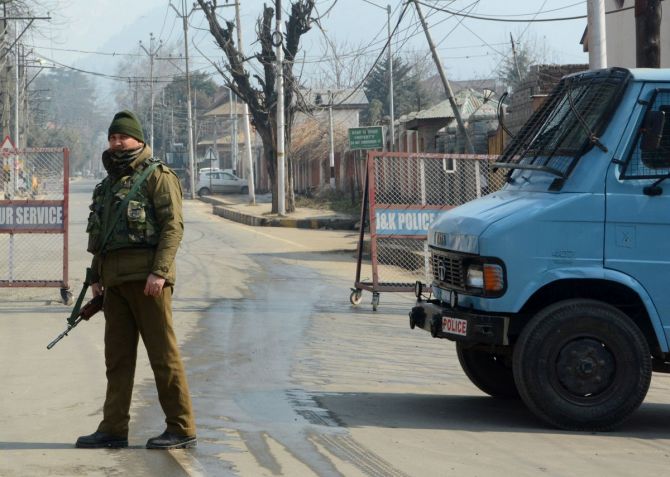 'Today is 2nd Anniversary of dreaded Lethpora Terror incident. There shall be NO ROP on ground. Due to adverse inputs, movement of VIPs/ProtectedPersons has been discouraged and all concerned were informed in advance NOT to plan a tour today (sic),' the Srinagar Police said on its official Twitter handle.

However, Omar asked the police to 'please tell me under which law you have detained me in my home today?'.

'You can advise me not to leave my house but you can't force me to stay in using security as an excuse,' he said.

'Please share the written communication address to me & acknowledged by me (or my office) informing us in advance of these restrictions. Surely this anniversary didn't come as a surprise to the administration,' he said in another tweet. The NC condemned the 'arbitrary detention' of the party leaders and their family.

'The party demands immediate lifting of these uncalled for and unlawful measures,' the party tweeted.

In a joint statement later, several leaders, including NC general secretary Ali Muhammad Sagar, denounced confinement of the party president and the vice president at their residence and termed the measures arbitrary and a gross intrusion of fundamental rights.

'Confining party leaders to their homes exposes the iron fist approach towards Jammu and Kashmir. The measure is the gross violation of human rights and is highly condemnable.

Previously also at various instances, the leaders were debarred from moving out from their residences exclusive of any reason,' the statement said. The party leaders said the undue measure marks a new low in the curtailment of fundamental rights of the people of Jammu and Kashmir.

'The measures reveal abnormal is the new normal in this part of the world. Such harsh and unwarranted measures would further alienate the people and delay restoration of normalcy in Kashmir, which has been reeling under fear psychosis and a sense of insecurity since August, 2019,' they said.

Marking a new and dangerous low in the Centre's Kashmir policy, the leaders said the disdain with the political leaders who kept the political process alive in Kashmir braving all odds and threats was appalling. 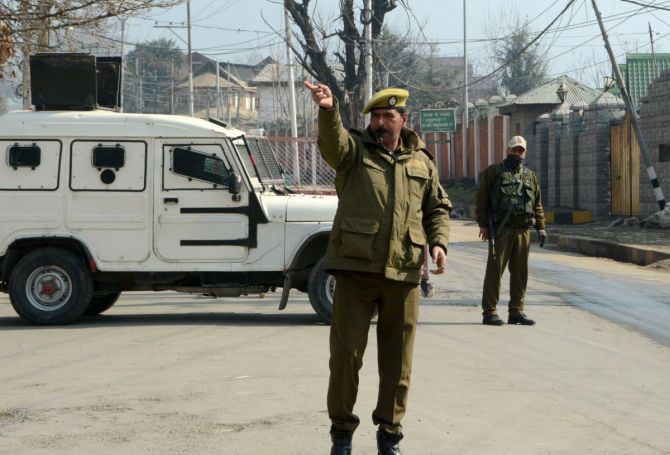 'The amorality of the government's treatment towards mainstream leaders is certainly dispiriting, but dangerous as well on account of the political vacuum it will create.

'Therefore, we impress upon the incumbent government to refrain from such bullish and high-handed measures,' they said in their joint statement.

People's Democratic Party president Mehbooba Mufti had on Saturday too claimed that she was placed under house arrest ahead of her visit to the family of Athar Mushtaq -- one of the three alleged militants killed in an encounter in Parimpora locality in Srinagar in December last year. 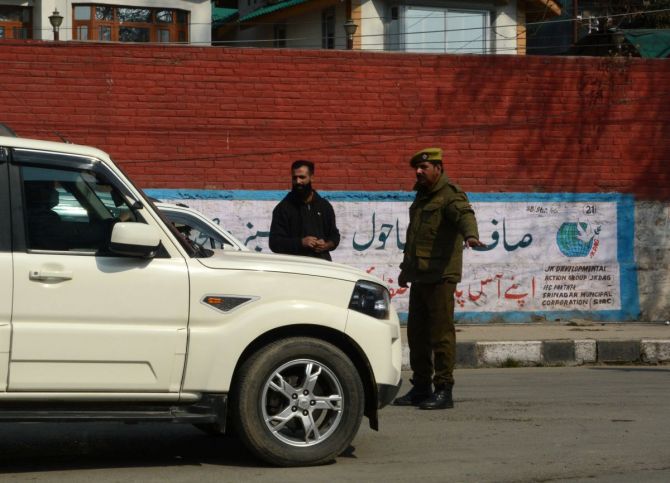 'Placed under house arrest as usual for trying to visit the family of Athar Mushtaq killed allegedly in a fake encounter. His father was booked under UAPA for demanding his dead body.

'This the normalcy GOI wants to showcase to the EU delegation visiting Kashmir (sic),' she had said on Twitter.

IMAGES: Security forces outside the residence of National Conference leaders Farooq and Omar Abdullah in Srinagar. All photographs: Umar Ganie for Rediff.com
Source: PTI  -  Edited By: Hemant Waje© Copyright 2021 PTI. All rights reserved. Republication or redistribution of PTI content, including by framing or similar means, is expressly prohibited without the prior written consent.
SHARE THIS STORY
Print this article