When Obamas gorged on fish tikka and shami kebabs

The spread for Obama and his wife Michelle was a mix of Indian vegetarian and non-vegetarian fare, as the US First Couple relished the food against the background of tunes of some popular English and Hindi songs played by the naval band.

Around 170 American and Indian guests from diverse fields were present at the state dinner laid out at the sprawling lawns of Mughal Gardens at the Rashtrapati Bhavan. Some of the guests were from Obama's entourage.

The meal was not obviously complete without an assortment of Indian breads like rotis and naan.

The Obamas and the other guests were free to choose between paper naan, paranthas and tawa rotis as they were treated to traditional Indian culinary delights.

Also, on the table were pineapple halwa, churipayas, besides herbal tea and Indian coffee to supplement the main course. 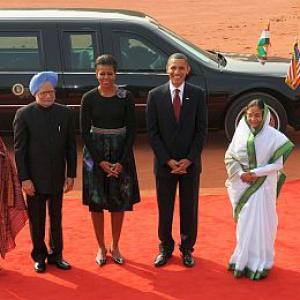 'Obama attaches a lot of value to India'