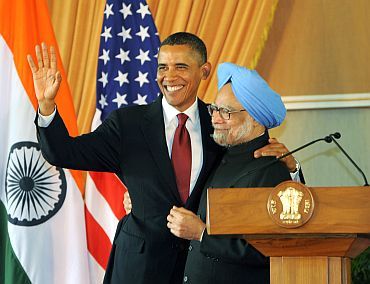 Terming United States President Barack Obama's maiden trip to India as a triumph, noted American experts cutting across ideological spectrum on Monday said that it has taken the Indo-US relationship to an altogether new level.

"I think the (Obama) visit was a triumph," said Ashley Tellis, of Carnegie Endowment for International Peace, who had served as one of the foreign policy aid of the presidential campaign of Senator John McCain in 2008.

"His speech to Parliament was a masterly blend of idealism and realism and he convincingly proved the point that he personally cares about India and that the US-India relationship is vitally important for the United States; that was the most significant achievement," Tellis said.

"It turns out the skeptics were wrong. Historians will see the trip as an important milestone in the maturation and consolidation of what President Obama called 'the defining partnership of the 21st century'," said Robert M Hathaway, Director, Asia Program Woodrow Wilson International Center for Scholars.

More substantial, he said was the obvious personal chemistry between the two leaders, a rapport that should, in the years ahead, facilitate other more concrete achievements tying the two countries together.

"The dissolution of suspicion, the nurturing of trust, and the promotion of bonds of genuine friendship and understanding -- historians may someday see this as the most significant aspect of the Obama visit," Hathaway observed.

Lisa Curtis of the Heritage Foundation, another Washington-based think-tank, said Obama's trip was successful in consolidating Indo-US ties and even taking the engagement to a new level.

"The visit sent a clear signal of the importance his administration attaches to India, highlighting both economic and security cooperation," she said.

"Robust endorsement of India's global role can also be seen in other more concrete initiatives like the easing of export controls on Indian organisations and support for Indian membership in nonproliferation groupings like the Nuclear Suppliers Group and the Missile Technology Control Regime."

"These announcements demonstrate that Obama administration will continue the legacy established by the Bush administration of incorporating India into the global non-proliferation regime, and viewing India as a partner, not a target, in stemming proliferation," Curtis said.

The US President's statement that India would now be "treated the same as our closest allies and partners" should lay to rest Indian concerns that the Indo-US relationship may languish under the Obama regime, Curtis said.

It was important for Obama to establish that the US would continue to prioritise relations with India, and not allow the Afghanistan-Pakistan agenda to bog down US-India ties, she said, adding that Obama seems to have achieved this objective, having handled very carefully expected questions on the US relationship with Pakistan.

"Obama made a good case for how expanding US-India investment and trade ties will benefit the US economy. He provided more finessed remarks on the outsourcing issue than he has in the past, explaining that it is not a one- dimensional issue and that each side should focus more on the mutual benefits gained from their economic linkages," she said.

"This should help build support back in the US for strong US-India economic ties, and dispel the image of India as economic competitor to the US," Curtis added.

Source: PTI© Copyright 2020 PTI. All rights reserved. Republication or redistribution of PTI content, including by framing or similar means, is expressly prohibited without the prior written consent.
Related News: Barack Obama, India, United States, Lisa Curtis, US
SHARE THIS STORY
Print this article
Obama to address Parliament on November 8
US frustrated with Pakistan's double game?
Obama wishes Muslims on Ramadan