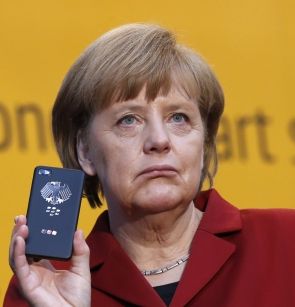 United States President Barack Obama knew that German Chancellor Angela Merkel's mobile phone was being tapped and personally approved the spying, which may have begun as early as 2002, a damning media report said on Sunday.

Obama was informed about the National Security Agency's tapping of Merkel's mobile phone already in 2010 by its director Keith Alexander, Bild am Sonntag newspaper reported, widening the espionage scandal.

The president "not only did not stop the operation, but he also ordered it to continue," a high-ranking NSA official was quoted as saying by the paper. The White House later ordered the spy agency to prepare a detailed dossier on the chancellor. President Obama did not trust Merkel and wanted to know everything about her, Bild said quoting the official, who was not identified.

Subsequently, the NSA stepped up its surveillance of Merkel and snooped into all conversations made with her mobile phone in communicating with her party colleagues, the newspaper said. The agency also cracked the codes of a new supposedly tap-proof  mobile phone she has been using since the middle of this year, the newspaper said. This showed that the NSA continued its spying on the chancellor until very recently, it said.

Merkel's conversation from her office via fixed line phones, which she used to communicate with other world leaders, was secure from eavesdropping, the newspaper said.

A report also claimed that the president had assured chancellor Merkel during a telephone conversation last Wednesday that he was not aware of the NSA's spying on her. When Merkel called him to complain about the suspected surveillance by the NSA, Obama told her that he would have stopped it if he knew about it, Frankfurter Allgemeine Zeitung reported.

Bild said President Obama's interest in information about Merkel was evident from the fact that intelligence gathered by the NSA did not go as usual to its headquarters in Fort Meade, in Maryland, but directly to the White House.

Another report in weekly news magazine Der Spiegel said the NSA may also have spied on the entire government complex in Berlin from the nearby American embassy.

Leaked NSA documents showed that Merkel's phone had appeared on a list of spying targets since 2002, and was still under surveillance shortly before Obama visited Berlin in June, it said.