What Obama will say in his Siri Fort address 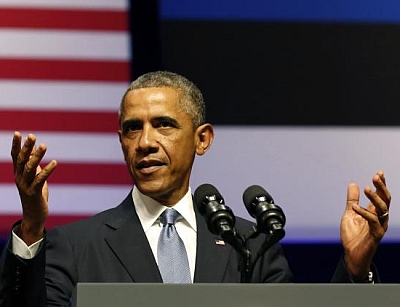 United States President Barack Obama, during his address at the Siri Fort auditorium on Tuesday, would speak on how to tap the energy of the people of India and the US, and to turn that into positive progress on the issues that matter in people's lives, a top official has said.

"The President will want to speak to how do we tap into the energy and the support in both countries for the relationship and turn that into positive progress on the issues that matter in people's lives.

"When you look at energy, counterterrorism, defence cooperation, efforts to create economic growth, these are things that have a direct bearing on the well-being of US and Indian citizens," Deputy National Security Advisor Ben Rhodes, said early this week.

In his remarks, the president will want to speak on some of the other common attributes that the US and India have.

"There's a large Indian Diaspora that has thrived in the United States. People have long looked at this relationship and seen the fundamentals in place for a really, really close partnership, and yet it's been a challenge in translating that into outcomes," Rhodes said.

"We're both very diverse countries, and we both should see our diversity as strength," he said.

"(In) the US, there's been a long history of ensuring that there's broad economic

participation and political rights for all of our minority populations," he said.

Similarly, India's diversity has been a great strength, its religious diversity, when you look at a significant minority population, Sikh population and countless other religions add to the tapestry of Indian society, Rhodes said.

"So I think the President will speak to the importance of diversity as a democratic value, and the importance of societies drawing on the talents of all of its people -- be they religious majorities or minorities, men or women, rich or poor," Rhodes noted.

"In India, what we've seen is enormous progress in lifting hundreds of millions of people out of poverty, but still enormous work that has to be done," he said.

Prime Minister Modi is focused on that and so I think he'll speak to the potential within India for that type of broad-based economic growth, the presidential aide said.

"Our ability to share democracy as a strength, our diversity as a strength, and our ability to measure our progress not just by the wealth that's created at the top but by the ability to reduce inequality and create opportunities for the least among us -- that's a common vision that is shared in both the countries. I think that will figure prominently in his speech," Rhodes said.

Obama will leave India after his address at the auditorium in New Delhi on Tuesday morning to meet the new Saudi King.
Source: PTI© Copyright 2020 PTI. All rights reserved. Republication or redistribution of PTI content, including by framing or similar means, is expressly prohibited without the prior written consent.
Related News: Ben Rhodes, United States, India, Barack Obama, New Delhi
SHARE THIS STORY
Print this article