Weeks after 'breakthrough' in the Indo-US civil nuclear cooperation deal, substantial work is yet to be done, says Nayanima Basu. 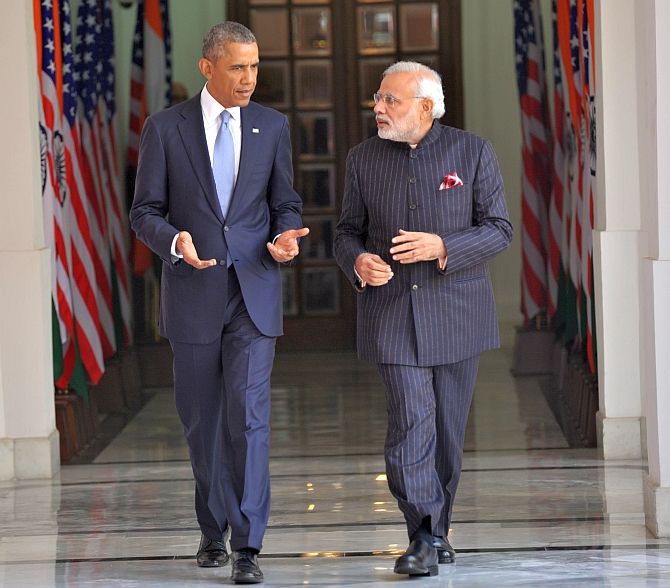 Weeks after India and the United States claimed to have achieved a "breakthrough" in the civil nuclear cooperation deal, the government has not yet come out with an explicit statement explaining its main tenets.

However, according to the ministry of external affairs, India will follow international best practices and will work within the nuclear liability laws while kick-starting deals with US companies.

“When we arrived at an understanding with the US, we did so within the four corners of our law, international practice and our own bilateral agreements that we have agreed to... these are matters which need to be legally checked,” MEA spokesperson Syed Akbaruddin said on Thursday, adding the government will come out with a FAQs sort of a statement on the matter.

Akbaruddin denied claims that under the India-US civil nuclear deal, only the operators will be liable and not the US suppliers.

Substantial work still remains to be done and the fine prints have to be worked out before the deal can be actually labeled as a breakthrough, a senior official told Business Standard.

The US is also jittery with the fact that India has not yet ratified the Vienna convention on supplementary compensation for nuclear damage, the official said.

India signed the UN nuclear convention in 2010. According to Akbaruddin, it will be ratified soon.

US Ambassador to India Richard Verma said, “it is important to find a common ground and reaching an understanding to overcome long-standing obstacles to increased commercial engagement concerning the deal.”

Verma also had a meeting with Foreign Secretary S Jaishankar on Thursday in which the nuclear deal was taken up as the top priority, sources said.

“These advances will provide a foundation for moving forward and fulfilling the vision of US-built reactors contributing to India’s energy security and promoting Prime Minister Narendra Modi’s goal of moving away from carbon-based energy sources and delivering electricity to the hundreds of millions of Indians who lack reliable access to it,” Verma said at the Vivekananda International Foundation.

“Our leaders have set the tone... it is up to the rest of us to drive the relationship forward… We must must all bring the energy and persistence necessary to overcome the obstacles and see the possibilities before us as we march towards progress on our shared objectives,” he said.

Verma cited as an example the breakthrough achieved in the field of nuclear cooperation during US President Barack Obama’s visit last month.

“Bottom line is that both of our governments are full steam ahead towards achieving the objectives Prime Minister (Narendra) Modi and (US) President (Brack) Obama set out for us,” he said.

Apparently, American nuclear reactor suppliers such as General Electric and Toshiba’s Westinghouse are also not satisfied with the concept of insurance pooling, suggested by the Indian government.

India and the US signed the nuclear deal in 2008. However, since then the deal has been stuck on several issues.

After the Obama’s visit last month, the government has come out only with a framework on India accepting the principle that the nuclear plant operators should bear main liability in the event of a nuclear disaster.