A 62-year old Black male, initially identified as a ’Person of Interest' by the New York Police Department in the Brooklyn subway shooting, has now been named suspect in the attack that left 23 people injured, including 10 who were hit when he fired at least 33 shots with a nine mm handgun. 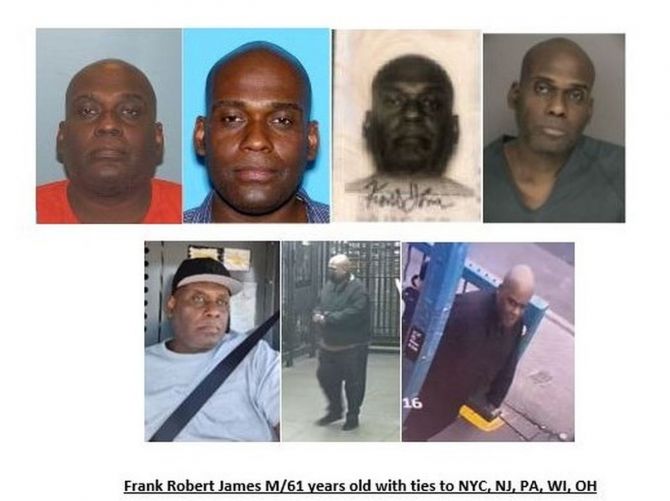 IMAGE: New York Police Department tweeted these images of Frank Robert James, who has been named as a suspect in the Brooklyn subway shooting.

James is still at large and the police is asking anyone with information about the incident or his whereabouts to contact authorities.

James, wearing a neon orange vest and construction helmet, grey coloured sweatshirt and a surgical mask, was identified as the ’person of interest’ in the Brooklyn subway station shooting hours after the carnage unfolded in the local subway train during the rush hour morning commute Tuesday.

At a news conference Tuesday evening, New York City Police Commissioner Keechant Sewell said that ”we are truly fortunate” that the shooting ”was not significantly worse than it is.”

James was travelling on a Manhattan-bound N subway train during morning rush hour and opened two canisters that dispensed smoke throughout the subway car. He then shot ”multiple” passengers as the train pulled into the 36th Street Station in Sunset Park, Brooklyn.

Ten people -- seven males, three females -- were injured by gunfire and an additional 13 were either injured as they rushed to get out of the train station or they suffered smoke inhalation. None of the injuries appear to be life threatening.

From the subway car in which James travelled, law enforcement authorities recovered his belongings -- a nine millimetre semi-automatic handgun, three extended magazines -- one still in the weapon, one under a seat and one in a backpack, a hatchet, a liquid believed to be gasoline, and a bag containing consumer grade fireworks and a key to a U-haul van. They also recovered 33 discharged shell casings, 15 bullets, five bullet fragments, and two non-detonated smoke grenades.

Detectives located the U-haul van abandoned in Brooklyn, and authorities said records show that James rented the van in Philadelphia. Police said they believe the van is ”connected” to the suspect.

”We still do not know the suspect's motivation. Clearly this individual boarded the train and was intent on violence,” Sewell had said, adding that a highly coordinated investigation is being conducted by the New York Police Department detectives, the FBI, NYPD Joint Terrorism Task Force and the Bureau of Alcohol, Tobacco, Firearms, and Explosives.

NYPD Chief of Detectives James Essig said that as the subway train approached the 36th Street Station, witnesses say the man opened up two smoke grenades, tossed them on the subway floor, brandished the nine-millimetre handgun and ”fired that weapon at least 33 times striking 10 people.”

James then fled the scene and detectives are actively trying to determine his whereabouts.

Essig said there is a USD 50,000 reward for information about the suspect and the attack.

New York City Mayor Eric Adams said that the suspect in the attack detonated smoke bombs to cause havoc. ”We will not allow New Yorkers to be terrorised even by a single individual. The NYPD is searching for the suspect at large, and we will find him.”

”Today was a difficult day for New York. Days like these are planned out too often in cities across America. This morning witnessed an act of violence and evil in the heart of Brooklyn,” he said, adding that the suspect turned a subway train into a ”war zone”.

”I have been realistic and outspoken about my commitment to protecting public safety. I stand by that and will continue to do everything in my power to dam the rivers that feed the sea of violence. But this is not only a New York City problem, this violence, these guns, these relentless shooters are an American problem and it's going to take all levels of government to stop them.”

He said America is a country where ”buying weapons of mass destruction is as easy as picking up a piece of plywood or garden shovel, a country where they're more guns than people. There are over 400 million guns in this country alone. The US gun homicide rate is 26 times that of other high income countries.”

The police also said that James has allegedly made some ”concerning posts” online where he has ranted about homelessness, New York and also mentions Mayor Adams. ”And as a result of that, in an abundance of caution, we're going to tighten the mayor's security detail,” Sewell said.

The consulate general of India in New York is monitoring the horrific shooting incident at a subway station in Brooklyn and is in touch with the local authorities.

Consul General Randhir Jaiswal told PTI that the consulate is monitoring the situation and ”we are in touch with authorities.”

The consulate said in a tweet, "Deeply disturbed by horrific shooting in Brooklyn today. We are in touch with local authorities.  Our prayers and thoughts with those injured." 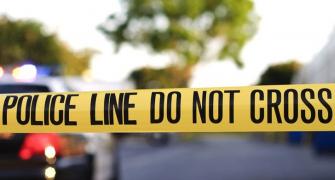 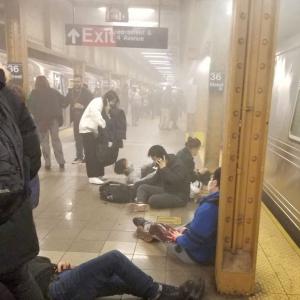 16 hurt in NYC shooting, hunt on for man in gas mask 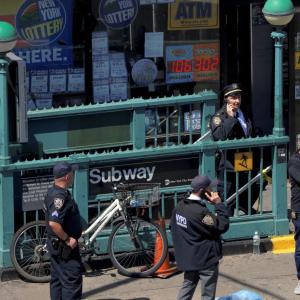 NYC shooting not being probed as terrorism act: Police