The iconic Times Square in New York City, reverberating with the chants of ‘Vande Mataram' and ‘Bharat Mata ki Jai', was on Sunday drenched in hues of saffron, white and green as the biggest Indian tricolour was unfurled at the popular destination to mark the 75th anniversary of India's Independence Day. 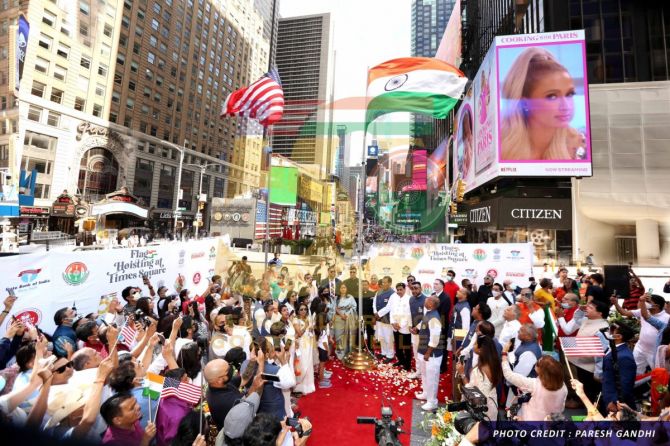 The FIA had hoisted India's National Flag at Times Square on the country's Independence Day last year, the first time the Indian tricolour was unfurled at the iconic New York City destination.

This year, marking 75 years of India's independence, it hoisted the biggest tricolour unfurled at Times Square so far.

”We want to continue this tradition. This year, we are hoisting the biggest tricolour unfurled at Times Square so far,” Vaidya told PTI.

The 48 square feet-long tricolour was unfurled atop a 25-feet tall flagpole.

Patriotic Indian songs reverberated through Times Square, the crossroads of the world, as members of the Indian diaspora gathered in large numbers for the commemoration.

A special guest at the event was Indian-American sporting icon Abhimanyu Mishra, 12, the youngest grand master in chess history.

”Today is very special day, a historic day in India's onward march as a nation. Today is the day to celebrate our achievements, successes, our freedom struggle, all the sacrifices done by the leaders and also to chart out our future course of action,” Indian diplomat Jaiswal said.

Jaiswal said the day is also to ”celebrate our vibrant democracy and its progress and prosperity,” adding, ”Let us celebrate Azaadi Ka Amrit Mahotsav today and in the days to come.”

The day-long celebrations by the FIA started with unfurling of the tricolour at Times Square, the first India Day billboard at Times Square will be displayed for 24 hours, the Empire State Building will be lit in the hues of the Indian tricolour and the day ended with a gala cruise on the Hudson River to be attended by top government officials, special guests and members of the Indian-American community.

On the occasion, a special cricket tournament trophy’India@75 Cricket Cup' was unveiled by Jaiswal. The cricket tournament is being organised by not-for-profit organisation ’22Yardsport Cricket' which is focussed on promoting cricket in North America.

”This year is very special for us. The ‘India@75' cricket tournament will be held next weekend,” said 22Yardsport Cricket founder Jeetendra Barmecha, who along with the organisation's officials Gaurav Jayaswal, Raj Mohabe, Amit Saxena and Tarun Gursahani present at the commemoration thanked Jaiswal and the FIA for allowing ”this platform to promote cricket.”

22Yardsport Cricket has the only cricket ground in Westchester Country and Barmecha said, ”Hopefully we will have more in the future.”

Anil Bansal, current president of FIA, said India is launching year-long celebrations from August 2021 to celebrate 75 years of Independence and the FIA will also start the celebrations on August 15, 2021, by flag hoisting at Times Square and at the state capital in Rhode Island.

He said the Empire State Building will be lit in the Indian tricolour and the Independence Day message will be displayed on the largest Jumbotron at Times Square for 24 hours.

The FIA also organises its annual flagship event -- the India Day Parade -- to mark India's Independence Day in August. Top US political leaders, lawmakers as well as prominent members of the Indian-American community and celebrities from India have participated in the annual parade that draws thousands to the heart of Manhattan each year.

However, like last year, the parade will not be held this year too due to the Covid-19 pandemic.

Yoshita Singh in New York City
© Copyright 2021 PTI. All rights reserved. Republication or redistribution of PTI content, including by framing or similar means, is expressly prohibited without the prior written consent.