A maid of Rajesh and Nupur Talwar, the main accused in the Aarushi-Hemraj murders, on Monday told a special CBI court in Ghaziabad that the main doors of their house were locked from inside on the morning after the killings.

Bharti Mandal, who was employed just six days before the shocking murder, in her deposition said that she reached the Talwars' house on May 16, 2008 at 6 o' clock in the morning.

Narrating the incident before the special CBI Judge S Lal, Bharti said that she kept on ringing the bell but no one responded.

After that when she was about to leave Nupur opened the inside wooden door and asked her the whereabouts of her servant Hemraj.

Bharti replied that she did not know, at which Nupur told her that "he must have gone to bring milk from Mother Dairy."

The 35-year-old maid from West Bengal said that Nupur told her that "Hemraj must have locked the door from outside".

The wooden door and the iron door were in the same hook.

"Nupur also said that when Hemraj returned from the Mother Dairy, the doors will be opened. Till then you sit out side," Bharti told the court in her deposition.

Bharti said she also asked Nupur to hand over the key so that she could open the door from outside.

"Nupur asked me to go down and reach the balcony so that she could throw the key from upstairs," stated Bharti.

Bhatri also deposed before the court that when she reached the balcony, Nupur told her to go back and check whether the door was not locked, and only the bolt was latched, but Bharti wanted the key reasoning out that what if that door was locked from outside.

At which Nupur threw the "long key to me", said the maid.

Bharti returned to the main door and as she pushed it, it opened.

"After that I opened the bolt of the iron door and stood there. I saw Rajesh and Nupur Talwar crying. I thought some thief had entered the house. I asked the reason for their crying and Nupur asked me to come inside Aaruhi's room with her and I followed her," the maid said.

"As Nupur entered Aarushi's room, I stood at the door," she stated in the deposition.

Bharti told the Judge, "Nupur pulled out a bed sheet and I saw Arushi's neck was cut. I was so scared. Nupur told me see what Hermraj has done. After this, I told Nupur to call some one form the down stairs."

She went down and rang the bell of a house and told the whole story to a woman.

Bharti said that she asked the Talwars whether she should do dish washing and the Talwars said "no" at which Bharti went to do work in other households.

She also told the court that Rajesh was wearing red T-shirt and a half trouser and Nupur was wearing a maxi.

These exhibits were also opened in the court on Monday during the proceedings.

One of the defence counsel, Manoj Sishodhaya said that the witness would be cross examined on Tuesday -- as the CBI did not tell the name of the witness in advance- so that they could not prepare for the cross examination.

They have also moved an application before the court to further order the CBI to tell the name of the witness in advance.

This is the first time that maid was fielded as a witness in the sensational case where the parents of the murder victim are main accused. 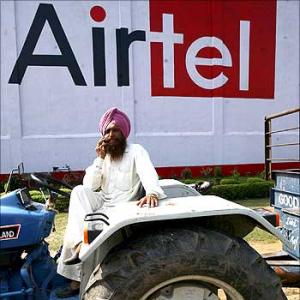