NSCN-IM rebuts Naga governor, says talks are back on table

Three weeks after Nagaland governor and Centre's interlocutor for Naga peace talks R N Ravi said in the assembly that political negotiations have concluded, the NSCN-IM has claimed that his assertion was "reckless" and talk are back on the table. 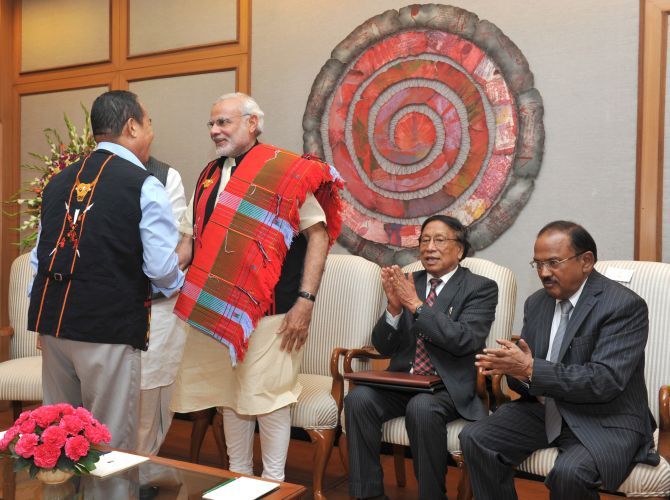 IMAGE: rime Minister Narendra Modi at the signing ceremony of the historic peace accord between Government of India & NSCN, in New Delhi, August 3, 2015. Photograph: PIB Photo.

The Naga group, in a statement issued on Wednesday night, said it would not sign any agreement that is "short of mutual standards agreed upon".

"Recently, unnecessary confusion was thrown into the air because of a reckless statement made by R N Ravi, the governor of Nagaland, in the state assembly that the Indo-Naga political talks have concluded.

"It is a matter of regret that his (Ravi's) role as interlocutor is nothing less than disparaging and dismal," the statement said.

The NSCN-IM further stressed that Ravi should be "cautious of every single word he utters" about the vexed issue.

Noting that the negotiations were being held to arrive at a solution that is honourable and acceptable to the Centre as well as the Naga people, the NSCN-IM said "this is the official understanding and the only way to conclude talks".

Ravi had said in the assembly last month that negotiations between the Centre and Naga groups on the political imbroglio have concluded and there was a need to move swiftly towards a "final solution".