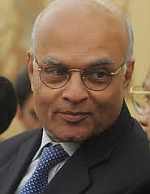 National Security Adviser Shivshankar Menon on Monday downplayed the recent "map row" with China contending that the issue required to be looked at in the perspective of boundary talks, which have made progress.

"I think you need to see these things in some perspective. We do have differences on where the boundary lies. We are discussing them. We have made progress in dealing with that," Menon said in reply to questions on China issuing e-passports that show Arunachal Pradesh and Aksai Chin as part of China.

"Chinese chose to put a watermark on their passports which shows the boundaries as they see it. We show our boundary as we see it on visas that we issue. So, what has changed? On our documents we continue to show what we regard as our boundary, they show their claims on their documents," he said.

Menon said India and China have agreed on a three-stage process for settle the boundary issue. "We are in the process of agreeing on a framework to settle the boundary and the next step, hopefully the third stage, is to actually agree on a boundary. Right now we are at the second stage," he said.