The National Register of Citizens (NRC) published on August 31, 2019 is the 'Final NRC', ruled a Foreigners' Tribunal (FT) in Assam, even as the Registrar General of India is yet to notify it. 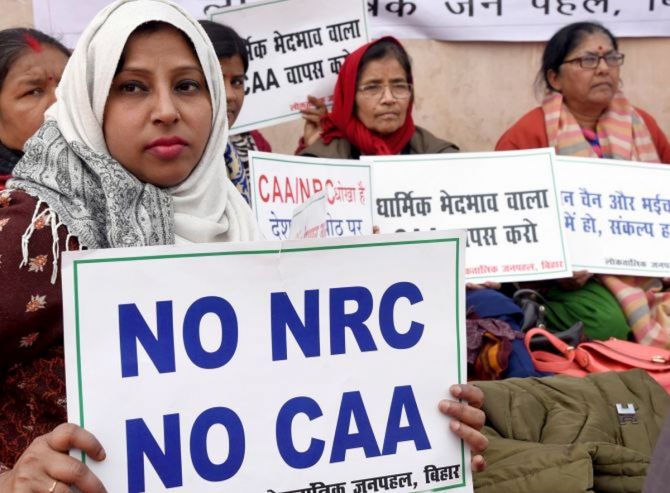 Declaring a man Indian citizen, the tribunal in Karimganj district held that though National Identity Cards are yet to be issued, 'but there is no doubt that this NRC Assam published in 2019 is nothing but Final NRC'.

The ruling was given by Sishir Dey, member (attached), FT-II, Karimganj in a 'D voter' (doubtful voter) case against one Bikram Singha of Jamirala village in the Patherkandi police station area of the district.

The case was registered first under the Illegal Migrant (Determination by the Tribunal) Act in 1999.

It was shifted to FT-I of Karimganj in 2007 after the IM(D)T Act was struck down by the Supreme Court in 2005, and was finally transferred to FT-II in 2017. The matter was heard on September 1 this year.

In its 'final order and opinion' issued on September 10, the tribunal said the appearance of Singha's name in the 'Final NRC' establishes his relationship with other members of the family, 'though not necessarily and lawfully establishes his citizenship due to pendency of his case' before the FT.

Maintaining that the pendency of the case before the tribunal might not be traced by the NRC authority, it said 'his inclusion of name in Final NRC may be validated only is this reference case is answered in his favour'.

'The names of other persons of his family in Final NRC may be conclusive proof of their Indian citizenship,' it said, ruling in his favour.

Addressing the issue of whether the NRC has 'attained finality or not' as raised by the government advocate, the tribunal said the NRC was prepared as per provisions of the Citizenship Act, 1955, and the Citizenship (Registration of Citizens and Issue of National Identity Cards) Rules, 2003, and on the directions of the Supreme Court.

The SC had directed for the preparation of the NRC in a time-bound manner, whose last step was mentioned as 'Finalisation of Final updated NRC' and the date for the completion of the process was fixed on August 31, 2019, the tribunal mentioned in its order.

'Accordingly Final NRC (i.e. Supplementary List of NRC together with Draft NRC) has been published on 31.08.2019 which is available online in the official website of NRC Assam wherein it's referred and mentioned as "Final NRC". This legal position is still in force,' it added.

Over 19 lakh applicants were left out of it. The Registrar General of India is yet to notify it.

Arguing against consideration of Singha's name in the NRC as valid evidence, the government advocate said that a person who had a case pending before any Foreigners' Tribunal was not eligible for inclusion in the 'Final NRC' as per the approved standard operating procedure of the authority.

Besides, he also expressed doubt about the finality of the NRC published on August 31, 2019.

Singha's lawyer countered the arguments by pointing out that his name was included in the NRC based on legal documents, and as the 'Final NRC' was published under the direction and monitoring of the Supreme Court, there should not be any doubt about its finality or legality.

She also contended that her client was a citizen of India by birth under Section 3 of the Citizenship Act, 1955.

Other documents, including land records in the name of Singha's grandfather from 1968 and employment records of Singha's father in the Indian Air Force for 29 years from 1972, were also presented in support of his claim, she told the tribunal.