Amid the buzz that Bihar Chief Minister Nitish Kumar could emerge as a prime ministerial candidate, Rashtriya Janata Dal leader Tejashwi Yadav on Sunday said if considered by the Opposition, the Janata Dal-United leader might be a "strong candidate" as he enjoys "immense goodwill" on the ground. 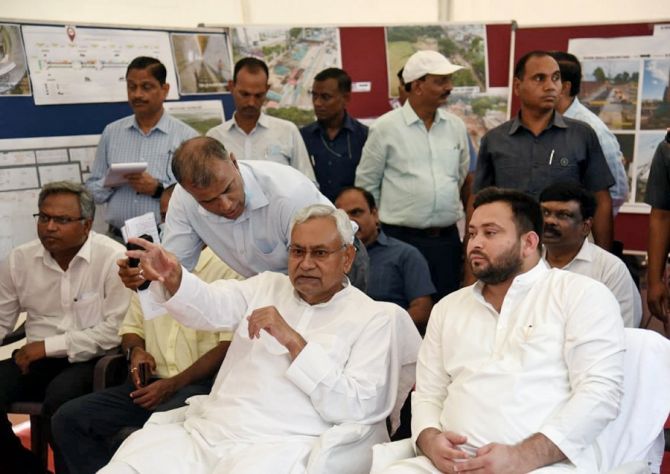 In an interview with PTI, Bihar deputy Chief Minister Yadav also said the Bharatiya Janata Party's narrative that jungle raj will be back with the return of the Mahagathbandhan government was a "tired discourse" and a "classic case" of "crying wolf".

The RJD leader said the coming to power of the Mahagathbandhan government with the JD-U, the RJD, the Congress and other parties uniting "augurs well for opposition unity".

"It signals that most of the Opposition parties recognise the larger challenge before the country -- the hegemony of the BJP, where on the back of money, media, and (administrative) machinery power, they are determined to stamp out all diversity from the Indian society as well as from the political spectrum," he alleged.

It is also a question of regional representation and social justice and development issues at the level of states, Yadav said.

"For all their talk of cooperative federalism, the BJP's attempt has been to consistently ignore regional disparities. Bihar needs special attention – nobody can deny it. But have we got anything from the Centre? Not quite," he said.

Yadav asserted that regional parties and other progressive political groups have to look beyond their narrow gains and losses and save the republic, asserting that it will be very difficult to rebuild if "we don't stop the destruction in its tracks now".

Asked if Kumar is best-suited to be prime ministerial candidate for 2024 polls and if he could be the Opposition's nominee, Yadav said, "I leave this question for Honourable Nitish ji. I cannot claim to speak on behalf of the entire Opposition, however, if considered, respected Nitish ji definitely might be a strong candidate."

For the last 50 years, he has been a social and political activist, having participated in JP and reservation movements, Yadav said.

"He (Kumar) has more than 37 years of vast parliamentary and administrative experience and enjoys immense goodwill on the ground as well as among his peers," the RJD leader said.

Kumar's decision to break ties with the BJP, his ally since 1996 except for the period between 2013 and 2017, has fuelled speculation about his prime ministerial bid.

Asked about the several adverse comments he had made about Kumar when the JD-U leader was in alliance with the BJP, Yadav said if one looks at the similarities and differences between them from a historical, national, contemporary and regional perspective, one will find a meeting of minds and objectives.

"We have emerged from the same churn of socialist movements and broadly share the same values. Sometimes there have been issues but none that are irreconcilable," he said.

"Our comments against the previous government were made in the capacity of a responsive opposition. All the interventions made by me and my party colleagues were to make sure the government heard the people's concerns and voices," he asserted.

On the BJP's barb that "jungle raj" will return in Bihar, Yadav said it is a classic case of "crying wolf".

"It's a tired discourse. Please mark my words – people understand and see through these tactics to divert attention and mislead. One, this is the age of social media and friends in mainstream media are not the only ones who control the discourse," he said.

"The ball is in the court of the mainstream media also -- instead of doing 'he said, she said' -- they should do their own checks. If the BJP says it is going to rain, friends in the mainstream media would do well to look outside the window and check for themselves if it would rain, instead of donning their raincoats and umbrellas and asking us if we think it's going to rain," Yadav said.

Asked about BJP leader Sushil Modi's allegations against the new Mahagathbandhan government and calling him a de facto CM, Yadav said everyone is free to say what they want but it doesn't mean that "we have to take such things seriously".

"Respected Nitish ji is the Chief Minister and I'll work with him to the best of my capacity," he said.

On his promise of 10 lakh jobs and the talk around it, Yadav said, "We have started in earnest, firstly, by deciding to fill up existing vacancies on a priority basis. Thereafter, we will have a programme that will focus on incentivising job creation in various sectors where Bihar has an advantage."

"While we get on with our work, I'll appeal to the Union government again to give Bihar special consideration – the state has waited far too long. I want to remind respected PM Modi of the promises he made to the people of Bihar before both the general elections and the assembly elections," he said.

Kumar took oath as chief minister along with Yadav, who has been designated deputy CM, earlier this month after the JD-U snapped ties with the BJP and joined hands with the RJD, the Congress and some other parties to form the 'Mahagathbandhan' government.

Asim Kamal in New Delhi
© Copyright 2023 PTI. All rights reserved. Republication or redistribution of PTI content, including by framing or similar means, is expressly prohibited without the prior written consent.