Kasab replies to judge in Marathi

In his latest antic, Pakistani gunman Ajmal Kasab chose to answer in Marathi most of the questions put to him by the trial court on Wednesday as he continued to deny his involvement in the 26/11 terror attacks.

"Mee bagitla nahin" (I did not see) and "Mala mahit nahin sahib" (I do not know sir) were his replies to the questions asked by Judge M L Tahaliyani.

To a question, Kasab said he was not aware that DNA samples retrieved from the blood-stained clothes of deceased constable Tukaram Ombale and traces of blood found on bullets (removed from Ombale's body) were of the same person.

It is the prosecution's case that Kasab had shot Ombale when he was grappling with him at Girgaum Chowpatty as a result of which the latter was fatally injured.

Kasab said he did not know that DNA report had stated that sweat on a handkerchief found in Skoda car (used by terrorists) was of slain terrorist Abu Ismael.

The lone surviving terrorist of the 26/11 siege said he was not aware that an Israeli cap found from Nariman House had matched with the DNA sample of slain terrorist Abdul Rehman Chhota.

He also feigned ignorance about a jacket found at another targeted site had matched with slain terrorist Abdul Rehman Bada.

To a question, Kasab said he was not aware that five cell phones had been shipped from China to Pakistan by a Karachi firm. Asked if he was aware that a mobile phone had been recovered from a slain terrorist at Hotel Oberoi, Kasab said "Mee bagitla nahin" (I did not see).
Source: PTI© Copyright 2020 PTI. All rights reserved. Republication or redistribution of PTI content, including by framing or similar means, is expressly prohibited without the prior written consent.
Related News: Kasab, Tukaram Ombale, DNA, Judge M L Tahaliyani, Abdul Rehman Chhota
SHARE THIS STORY
Print this article 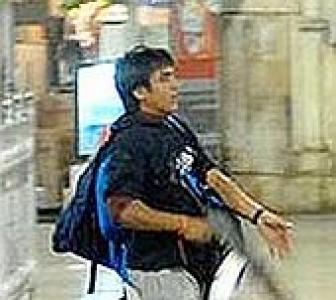