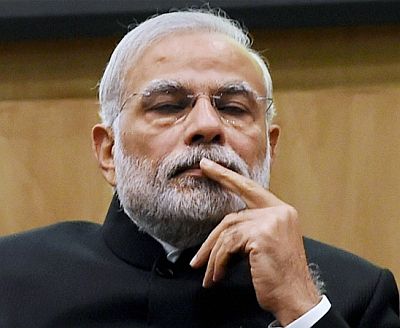 A group of academics and scholars on Friday expressed their outrage and anger against the "assault on academic and constitutional freedom", joining the recent protests by writers, artistes, filmmakers, historians and scientists over "rising intolerance".

"We as social scientists, scholars, teachers and concerned citizens, feel extremely concerned about the lynching at Dadri, and the murders of scholars and thinkers like M M Kalburgi, Narendra Dabholkar, Govind Pansare and others and wish to register our strong protest," a statement signed by a group of 250 academics said.

The scholars, including professors from leading institutions like Delhi University, Jawaharlal Nehru University, Madras Institute of Development Studies, IIT Delhi and IIM Calcutta, expressed "shock" at Prime Minister Narendra Modi's "late response" to the incidents as also the "implications of the victim blaming statement he made."

"To say that 'Hindus and Muslims should not fight each other but should fight poverty instead' puts the onus for peace and fighting poverty entirely on civil society and communities and absolves the state of any responsibility for both. As Prime Minister, he should have asserted that the state would defend the rule of law," it said.

Leading names like retired JNU professor Imtiaz Ahmad, political scientist Zoya Hasan and historian Romila Thapar were among the scholars from the country and abroad who expressed their worry about the prevailing situation in India.

"As scholars, we are extremely worried about the implications of these recent developments for our ability to study and write about different life ways and to critically analyse society, including social phenomena like religion," they said.

Pointing out that in a country with some 4,693 communities and over 415 living languages, each community was bound to have its own customs, including dietary choices, the scholars said, "Individuals may also follow practices different from the ones followed by the majority of their community. Any attempt to impose a uniform belief of practice, on either individuals or communities, is antithetical to the freedom enshrined in the Constitution.

"It is the State's responsibility to ensure this freedom."

On Thursday, 53 historians including Irfan Habib, K N Pannikar and Mridula Mukherjee hit out at the prime minister for not making any "reassuring statement" following concerns over "highly vitiated atmosphere" prevailing in the country.

Group of scientists including Padma awardees had come out with an online statement expressing concern over the "climate of intolerance" over which top scientist P M Bhargava said he will return his Padma Bhushan award, alleging Modi government was trying to make India into a "Hindu religious autocracy".

The saga of protests was started by writers with at least 36 Sahitya Akademi award winning authors like Nayantara Sahgal, Ashok Vajpeyi, returning their awards and five writers stepping down from official positions of the literary body, protesting against its "silence" over "rising intolerance".

Eminent film personalities like Dibakar Banerjee and Anand Patwardhan, who joined in the protest, have also returned their National Awards in solidarity with FTII students.