Novavax set for India launch with Serum Institute as partner 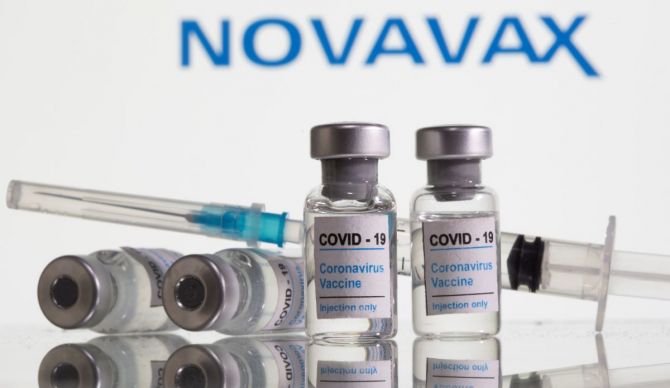 IMAGE: The vaccine candidate NVX-CoV2373 has shown 100 per cent protection against moderate and severe disease, 90.4 per cent efficacy overall, and also met the primary endpoint in the PREVENT-19 phase 3 trial, the company said in a statement. Photograph: Dado Ruvic/Reuters

United States-based Novavax on Monday said that its nano-particle protein based Covid-19 vaccine candidate has demonstrated an overall 90.4 per cent efficacy in phase 3 clinical trials. In India its partner Serum Institute of India has started manufacturing the vaccine it has named Covovax already.

In fact, the Centre expects availability of 200 million doses of Covovax between August and December. India will allow entry of this vaccine here once the US Food and Drug Administration approves it.

The vaccine candidate NVX-CoV2373 has shown 100 per cent protection against moderate and severe disease, 90.4 per cent efficacy overall, and also met the primary endpoint in the PREVENT-19 phase 3 trial, the company said in a statement.

SII is a crucial partner to achieve the production targets as it is going to make around 50 million doses of Covovax a month at Pune. The company has not disclosed the volumes it is making now, but it is less than the targeted volume of 50 million monthly doses at the moment.

SII CEO Adar Poonawalla had hinted a couple of months back that shortage of raw material supplies from the US had affected the scale up plan for Covovax.

Novavax’s study enrolled 29,960 volunteers across 119 cities in US and Mexico to evaluate efficacy, safety and immunogenicity. The company said that it has emphasised on recruiting a representative population of communities and demographic groups most affected by the disease.

Efficacy endpoints were accrued from January 25 through April 30, 2021 -- a time when the Alpha (B.1.1.7) variant, first identified in the United Kingdom, became the predominant strain in the US. Other strains, including Variants of Interest and Variants of Concern, were also on the rise during the PREVENT-19 endpoint accrual window.

Genetic variants of SARS-CoV-2 have been emerging and circulating around the world throughout the COVID-19 pandemic. A US government interagency group developed a Variant Classification scheme that defines three classes of SARS-CoV-2 variants: variant of interest; variant of concern; and variant of high consequence.

The B.1.1.7, B.1.351, P.1, B.1.427, and B.1.429 variants circulating in the US are classified as variants of concern. “To date, no variants of high consequence have been identified in the United States,” the Centre for Disease Control and Prevention, US noted in its website.

Novavax claimed that preliminary safety data showed that the vaccine was generally well tolerated, and serious adverse events were low in number. No single adverse event term was reported by more than one percent of the participants, it claimed.

"Novavax continues to work with a sense of urgency to complete our regulatory submissions and deliver this vaccine, built on a well understood and proven platform, to a world that is still in great need of vaccines."