Mumbai Police on Tuesday issued a show-cause notice to Republic TV's Editor in Chief Arnab Goswami over his alleged communal comments during his news shows on Palghar lynching case and the Bandra migrants gathering incident in April this year. 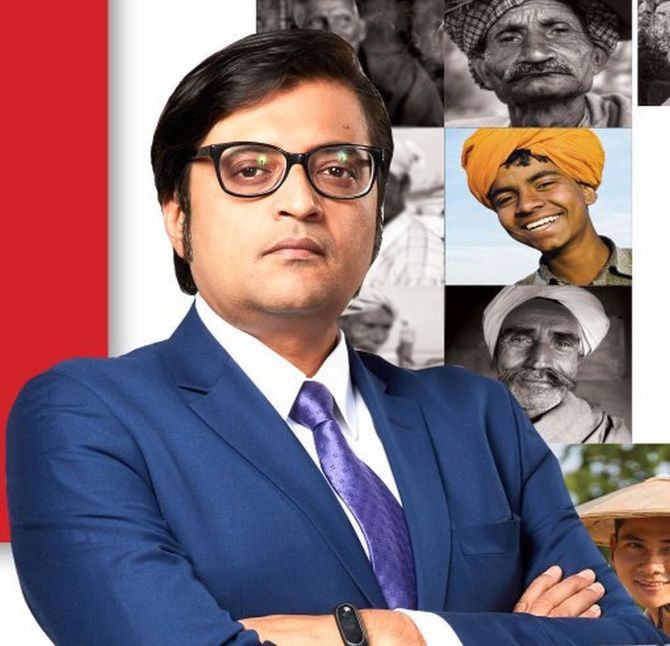 The notice has been sent under section 108 of the Code of Criminal Procedure, asking Goswami to show reasons as to why a bond of good behaviour should not be taken from him, a police official said.

He has been asked to appear before the Special Executive Magistrate and Assistant Commissioner of Police, Worli Division on Friday at 4 pm, the official added.

On April 21, Goswami conducted debate show Puchhta Hain Bharat on Republic Bharat TV on the issue of mob-lynching of two monks and their driver at Palghar in Maharashtra.

The show-cause notice said during the debate (in Hindi), Goswami asked whether it was a crime to be Hindu and wear saffron clothes and whether people would have remained silent had the victims been non-Hindu.

A case under Indian Penal Code sections 153 (giving provocation to cause riot) and 153 A (promoting enmity between different groups on the basis of religion) and other sections was registered against Goswami following the program, it added.

His comments could create communal disharmony and hatred between Hindus and Muslims, and the show evoked strong reactions on YouTube, the notice said.

Only because of the coronavirus pandemic there was no communal violence but the comments posed a threat to communal integrity and law and order, so as a preventive action the police had now started the process of taking an undertaking for good behaviour from Goswami under section 108 (1) (A), the official said.

A bond of Rs 10 lakh for the duration of one year with one guarantor 'who is well-known in society and who can control his behaviour' will be taken from Goswami, he added.

The notice also mentioned that before the Palghar incident, Goswami had allegedly made provocative comments about a crowd of migrant labourers which gathered outside Bandra Railway Station in Mumbai during lockdown.

A police case was registered against him in this case too.

Meanwhile, the Mumbai Police also issued a summons to Republic TV's executive editor and a journalist working with the channel in connection with the fake TRP racket it is probing, an official said.

Niranjan Narayanaswamy, executive editor -- news and journalist Abhishek Kapoor have been summoned by the Crime Intelligence Unit (CIU) at 12 noon on Wednesday, he said.

On October 10, Republic TV had aired a document which purportedly belonged to Hansa Research Group and 'there are reasonable grounds to believe that the summoned persons are acquainted with certain facts and circumstances of the document and same is required to be ascertained from them', the summons said.

The CIU on Tuesday recorded statements of Pravin Nizar and Nitin Deokar of Hansa agency.

The Special Investigation Team of the Crime Branch also visited the office of BARC and made enquiries with some officials including its scientific and technology officer, the police official said.

Vinay Tripathi, arrested by the CIU in the case, has been brought to the city on transit remand and four other accused who were arrested earlier in the case have been sent in police custody till October 16, he said.

Hansa is one of BARC's vendors on engagement with panel homes or people's meters.