Nothing political about meeting with Kanhaiya: Nitish

Bihar Chief Minister Nitish Kumar on Wednesday insisted that nothing much should be read into his recent meeting with an MP of the Lok Janshakti Party, which is headed by his bete noire Chirag Paswan, since members of Parliament and the state legislature call on him regularly over matters relating to their constituencies. 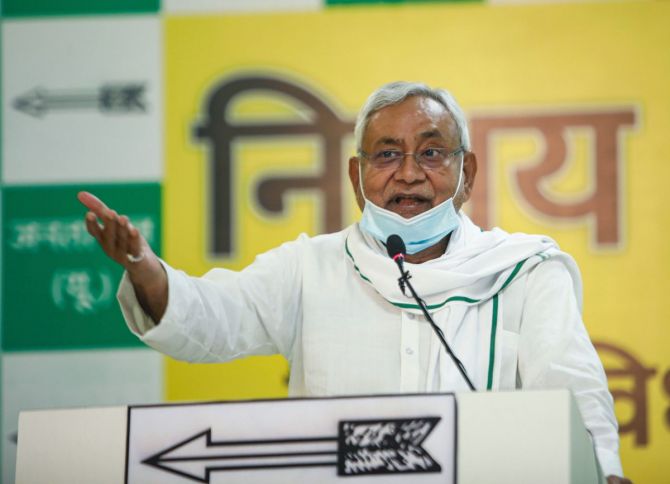 About the visit of Communist Party of India's Kanhaiya Kumar to his key aide and cabinet colleague Ashok Choudhary, the chief
minister said that the former Jawaharlal Nehru University student leader and an MLA of his party had met him earlier but did not discuss politics.

Nitish Kumar, who gave up the post of Janata Dal-United's national president recently but continues to wield supreme control
over it, was asked by reporters at the party's state headquarters in Patna whether Paswan needs to worry after LJP
Nawada MP Chandan Kumar Singhs visit to the chief minister's official residence on Sunday.

There is nothing to be worried about. Being the chief minister I am often approached by members of the state legislature and the Parliament who wish to discuss matters relating to their areas. They come when I grant an appointment and we talk. Thats it, he said.

Chirag Paswans rebellion against Kumar ahead of the Bihar assembly election in which he fielded candidates against JD-U nominees, cost the party dearly causing its tally to fall below 50 in the 243-strong house.

The LJP and the JD-U, both National Democratic Alliance members, have since been at daggers drawn.

At a recent NDA meeting in New Delhi chaired by Prime Minister Narendra Modi, Paswan excused himself citing ill-health after the JD-U raised strong objections over invitation having been extended to him despite his brinkmanship in the assembly poll.

About Kanhaiya Kumar, who met Choudhary Sunday afternoon along with CPI MLA Suryakant Paswan, the chief minister said Kanhaiya had met me before. And so had a legislator of his party. But our discussions were about issues relating to their constituencies. There was nothing political about it.

Reports in a section of the media had claimed that Kanhaiya, who is understood to be sore over the manner in which he has been treated by the CPI a number of times, was considering crossing over to the JD-U, an ally of the Bharatiya Janata Party.

The CPI central office in Delhi later came out with an angry statement condemning the mala fide and mischievous intentions of some sections of the media to malign the CPI and Kanhaiya Kumar.

Asked about JD-U raising the demand for caste-based census in the Lok Sabha, Nitish Kumar said This is a genuine demand and is one we have been raising for quite some time.

In the past we had even sent resolutions to this effect which were passed by both houses of the state legislature to the Centre.

"We must have an accurate idea of the respective population of different social groups so that we can formulate policies accordingly," he said.

Nitish Kumar also expressed confidence that the budget session of the assembly, which will commence on February 19 and conclude on March 24, will be conducted safely. Members have been asked to take precautions like wearing of masks in view of the COVID-19 pandemic.

In 2020 the budget session was curtailed in view of the outbreak.

This year, the opposition Grand Alliance led by Rashtriya Janata Dal's Tejashwi Yadav has threatened to boycott the assembly
and gherao the chief ministers residence if the session was shortened in the name of the pandemic.