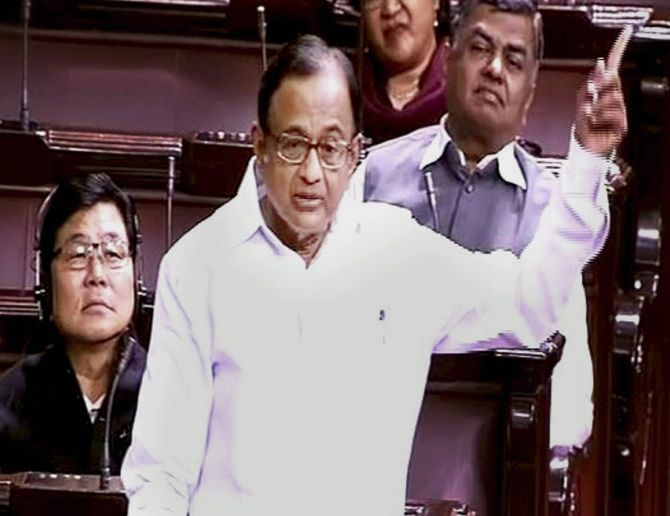 Opposition in Rajya Sabha on Thursday tore into the government for presenting a “disappointing” budget, with Congress leader P Chidambaram terming note ban as the “most terrible” decision and alleging that graft and black money have continued to thrive and large sections adversely affected.

The former finance minister also criticised Prime Minister Narendra Modi over the words he chose to attack his predecessor Manmohan Singh, saying he should remember that the Chair he sat on was used by Pandit Jawaharlal Nehru and even Atal Bihari Vajpayee and hence he should use right language.

Initiating the discussion on the 2017-18 General Budget, he accused the government of “fumbling, bumbling, scrambling” and inventing a new narrative every day.

Observing that he saw his first Rs 2,000 note four days after it came into circulation, he said there were many who were caught with crores worth new notes stashed away.

“This is the biggest scam of 2016... Where did they get these notes from? Did these go directly from the RBI press to them,” Chidambaram asked.

Questioning the remonetisation process, he asked “Why should you demonetise and then remonetise” and said that the government has replenished Rs 9 lakh crore worth of new currency notes as against Rs 17 lakh crore old notes that went out of circulation.

Chidambaram said the government had inherited an economythat, in the last two years of the United Progressive Alliance rule, had grown by 6.1 and 6.9 per cent respectively.

“The average for the 10-year period is 7.5 per cent. India is among the fastest growing large economies in the world. But through 2016-17, you made a series of mistakes, capped by the most terrible mistake”, he said pointing at demonetisation.

He also asked why was the government shying away from giving a GDP number even while giving an estimate.

“In an economy that has admittedly slowed down, your Budget contracts government expenditure,” Chidambaram said, adding that even in the budget, capital expenditure has been curtailed.

“You shifted money from defence research and added it to defence capital,” he said, pointing to the allocation of Rs 86,484 crore and adding that if the money for research was subtracted, then the actual defence outlay will be much less.

The Congress leader noted that the revised estimate came to over Rs 71,000 which meant that “either you are unable to spend the money, or you don’t have the money to spend”.

Allocation as a percentage of the GDP has only come down, Chidambaram said as he read out allocation figures of the last three budgets including that of 2016-17.

“To give a boost to the economy, we have to spend more. This is Economics 101,” he said, adding that the economy will suffer because of contracted expenditure.

He then spoke about the bull-taming sport of Jallikattu and said the protest over it in Tamil Nadu was “only a symbol” under which people converged. “The most vocal angst is about jobs. There are simply no jobs being created and jobs have been taken away,” he said, adding “this is the angst that brought young people to the Marina (beach in Chennai).”

Quoting figures, the Congress leader said 75 per cent of all small and medium industries are closed and then went ahead to state that these figures were “as per your (affiliate) trade union, the Bharatiya Mazdoor Sangh.”

“Everybody has different concerns. Some are concerned about intolerance — ban jeans, ban books, ban authors, ban beef... We have to find jobs for both the uneducated and the educated,” Chidambaram said.

Addressing the ruling BJP members, he asked them to tell him one strategy in the Budget which will create jobs.

“On the contrary, you have destroyed jobs. This is a powder keg. All it requires is a spark. I would like to caution the government,” he said.

Speaking about farmers, he said the Minimum Support Price gave an indication that agriculture is a viable vocation and farmers should continue as the government was there to take care of them.

“But there is nothing in the Budget speech about MSP,” he said adding that a wrong message was being sent to farmers.

And you are giving me money to conduct my funeral. Is this the way to treat farmers of this country,” he said referring to Fasal Bima Yojana.

Observing that the government withdrew 86 per cent of currency overnight, Chidambaram spoke of a large number of ATMs still not functioning.

He referred to a village in the national capital territory which was declared as the first digital village in the region and said ‘you go there and the people ask ‘What digital?’ It is very difficult to get away with a lie. The best way to do so is to utter the biggest lie’.

Taking a dig at the government, Chidamabaram said RBI officials are busy counting the notes physically. “You speak about digitisation. First, teach that to the RBI. Every rupee has come back, except in Bhutan, Nepal and NRIs, whose money can'’t come now, because you breached your promise to them.”

He also asked ‘if Rs 500 and Rs 1,000 notes are the cause of such major ills, how does Rs 2,000 note put an end to it. If 10 per cent of bank officials were dishonest earlier, now you’ve made all bank officials dishonest’.

“It has now become easier for people used to carrying briefcases of notes as they will have to carry a smaller brief case,” he said wryly.

Chidambaram gave examples of countries which still uses cash including the US, Autralia and Austria.

“There are serious issues of privacy are involved which are respected in any democracy,” he said, adding that people can't be told to go to the village fair and buy potatoes and tomatoes for Rs 7.50 and use credit cards.

“Don't even try to defend demonetisation. At least spare us the ignominy of listening to this defence,” he said.

Maintaining that the budget has been ‘a great disappointment’, he said ‘there is no overarching vision and goal. It has no strategy. By cutting expenditure, you’ve shown that your government has no empathy for the poor. The government must lean towards the poor. After all this, what have you achieved? You can’t achieve your fiscal goal of 3 per cent. This Budget is a demonstrable failure of economic management’.

Talking about the RBI’s decision not to cut policy rate, Chidambaram said it shows the Budget has no credibility.

“The RBI does not believe your numbers. The governor has said they are moving from an accommodative position to a neutral position. He has no faith in the story that you are rojecting. All bank chairpersons, who ordinarily sing the RBI's praises say there is no room to cut the lending rate. How will investment take place then? Capital is flowing out, investment intentions are declining, credit growth to industry is negative -- how is your industry going to grow?"

“The tried and tested method is to cut indirect taxes. GST is not likely to come into force before October 1. Cutting indirect taxes would have helped the consumer and the producer,” he said.

Defending the budget, Prabhat Jha (Bharatiya Janata Party) said the Budget has taken care of the interests of the poor, farmers and the backward classes and urged the Opposition not to play politics in the garb of demonetisation.

Jha pointed out that every government department has achieved 90-95 per cent of what was outlined in the last year’s Budget.

He said the government has imparted a thrust to rural infrastructure by increasing its allocation in Budget to Rs 1,27,233 crore. The Budget has also made provision for arm loans of up to Rs 10 lakh crore.

Quoting media reports, he said 80 out of 100 people interviewed said that demonetisation was a good move and even though they have to stand in queues today, the future of the country will improve.

Turning towards the Opposition benches, he said they (the Congress) should introspect why they have come down to 44 seats from 405 at one time.

"You should introspect on why the people have brought you (the Congress) down to 44," Jha said.

Vishambhar Prasad Nishad of the Samajwadi Party termed the Budget as 'directionless, anti-poor and anti-farmer'.

He said the poor, farmers and youth across the country are anguished and people are worried about how they will repay loans.

Sukhendu Shekhar Roy (Trinamool Congress) criticised the government for presenting rosy picture of economy saying the exports have lost momentum and the budget document was nothing but jugglery of words.

He said that as many as 224 million people in the country are still living in abject poverty while the country's wealth has increased and 60 per cent of economic growth has gone to one per cent of the population.

Punching holes in the Budget speech by Jaitley, he said foreign direct investment has gone up by 36 per cent but there was no mention about FIIs selling in equity and fixed income instruments (bonds) since November 8, 2016, when demonetisation was announced.

As on January 23 this year, the FIIs' net outflow includes selling their stake of Rs 42,000 crore in fixed income instruments and Rs 28,000 crore in equity, resulting in a total outflow of Rs 70,000 crore from the country, the TMC member said.

"The finance minister has not cared to speak a single word on this. Demonetisation is a slogan for elections. There is no mention about the amount of black money seized in the President's speech also," Roy said.

Talking of black money, he said, "I have been hearing about blackmoney stashed in Swiss banks since my childhood and after 50 years long career, I am still hearing the same.

"This government of saints is working for the last two and a half years. Why didn't they bring any information on black money stashed in Swiss banks. Panama papers (brought out by a global consortium of journalists) revealed that 500 Indian nationals deposited money into Swiss banks. Bengal BJP vice president's name was there in the list," he claimed.

Talking on autonomy of the Reserve Bank of India, he alleged that the RBI has been subjugated and it had followed government's directive on demonetisation which has led to currency crunch.

He also criticised the government for reducing the expenditure in health and other social sector as percentage of the GDP saying 'health expenditure is up 23 per cent in Budget document. These figures are deceptive. In the last two years they have reduced the expenditure on health'.

On political funding, he said,"Ever since our party was born, we have been demanding funding to political parties through Election Commission. You have introduced electoral bonds. But who will buy disclosing his or her identity."

Echoing similar views about the budget, Tapen Sen (Communits Party of India-Marxist) said "There is consistent decline in the expenditure. The ornamental language used to befool people will not serve the purpose."

Sen said 'the NITI Aayog has already prepared a list of 74 PSUs for sale of government stake. 'Make in India' slogan is to befool people and put all the national assets to auction. Planning Commission has been buried and NITI Aayog has been born with cheap marketeers'.

He was also of the view that after demonetisation, a large number of people have turned their black money into white by depositing these into banks.

The debate on Budget remained inconclusive and will taken up when the House reassembles on March 9 after the recess.