The Congress took potshots at the Bharatiya Janata Party for its demand to confer the Bharat Ratna on Hindutva ideologue V D Savarkar and sought to know by the saffron outfit is not seeking the country's highest civilian award for Mahatma Gandhi's assassin Nathuram Godse. 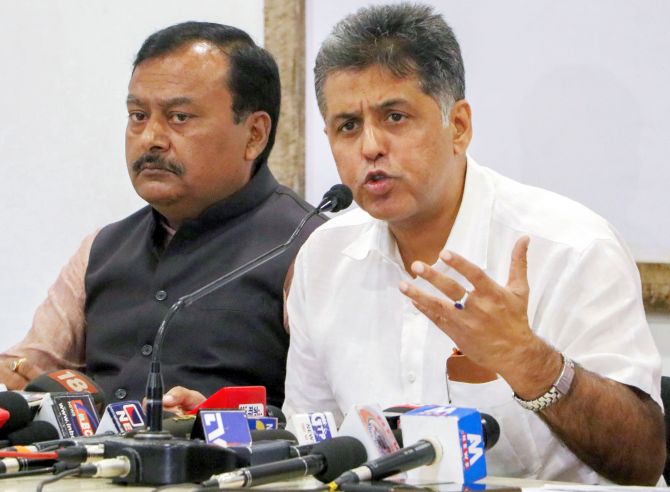 Congress spokesman Manish Tewari said the BJP-led government needs to seriously think about the path it wants to take on the issue in the 150th year of Mahatma Gandhi's birthday.

He said Savarkar was tried (and later acquitted) in the Mahatma Gandhi assassination case and an inquiry commission had found that possibly the freedom fighter and some of his colleagues had prior knowledge of the plot.

Releasing its manifesto for the October 21 Maharashtra assembly elections on Tuesday, the state BJP raised the demand for Bharat Ratna for Savarkar along with 19th century social reformers Jyotiba Phule and his wife Savitribai Phule.

Asked about BJP leader and Union minister Ravishankar Prasad's statement attacking the Congress for opposing the demand for Bharat Ratna to Savarkar, Tewari posed a counter question to take on the saffron outfit on the issue.

"I would like to ask a counter question - Why Mr Savarkar?, Why not Mr Godse, after all Mr Savarkar was only an accused in the assassination of Mahatma Gandhi, and Mr Godse was convicted.

"So therefore in the 150th year of Mahatma Gandhi's birth, if the National Democratic Alliance-BJP government is going to honour somebody who was tried for Mahatma Gandhi's assassination... and ultimately in 1969, when the Kapur commission was set up it found that possibly, he (Savarkar) and some of his other colleagues had prior knowledge of the events that took place on January 30, 1948," Tewari said.

"And if all that is correct then government needs to seriously think as to what path they are going," said the former Union minister.

The Lok Sabha MP from Sri Anandpur Sahib in Punjab also sought to corner the Modi government over the current economic slowdown in the country.

The lawyer-politician rued that under the current dispensation even the savings of the common man deposited in banks are not safe.

"All this is happening because the NDA-BJP-led central government is not able to run the economy of the country. The economic system of any country depends on four basic fundamentals -- savings, consumption, investment and employment.

"But, today there are no savings, consumption, investment or employment. Today, these four fundamentals of the economy are facing a deep challenge," said Tewari.

The Congress leader said if there is communal disharmony in the country, its economic progress will get stalled.

"No investor or person will invest in a country which does not have communal harmony," he said.