Congress leader Rahul Gandhi on Saturday said he "will die but never apologise" for speaking the "truth" as he is a Gandhi and not a Savarkar, and asked Prime Minister Narendra Modi and his "assistant" Amit Shah instead to apologise for "destroying" the economy of the country. 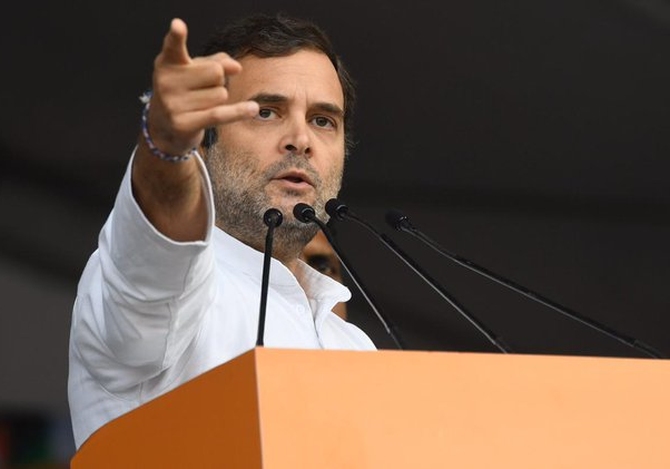 Addressing the Congress' mega "Bharat Bachao Rally" at Ramlila grounds, he took a dig at the Bharatiya Janata Party for demandingg an apology for his "rape in India" remark and said, "The BJP asked me to apologise. My name is not Rahul Savarkar, it is Rahul Gandhi, and I will never apologise for speaking the truth."

"I will die, but I will not apologise for speaking the truth and nor will any Congressman do so. It is Narendra Modi and his assistant Amit Shah who have to apologise to the country for destroying India's economy," he asserted.

Accusing Prime Minister Modi of single-handedly "destroying" the country's economy, he said, "All of India's enemies wanted that its economy, which is its strength, should be destroyed."

"That work (of destroying the economy) has not been done by the enemies, but by Prime Minister Narendra Modi himself. And, (he) still calls himself a patriot," he added.

Training his guns on the prime minister, a charged Rahul Gandhi said Modi only thinks about one thing - whether he has the power.

"They will do anything for the power- make the youth unemployed, destroy the economy and what not," he said.

He also alleged that people manning various institutions, including media and constitutional ones like judiciary, have forgotten their work.

While approving of media's criticism of the United Progressive Alliance government, he said, "I respect that and you did the right thing but today you have forgotten your work."

"It is your responsibility to rise when you are suppressed and attacked as it is not an attack on you but on the very soul of India. This country is being scared and suppressed, but no Congressmen have any kind of fear. I am telling those people in institutions not to fear from anything. The Congress party is standing with them. We will together end this atmosphere of fear in the country," he said. 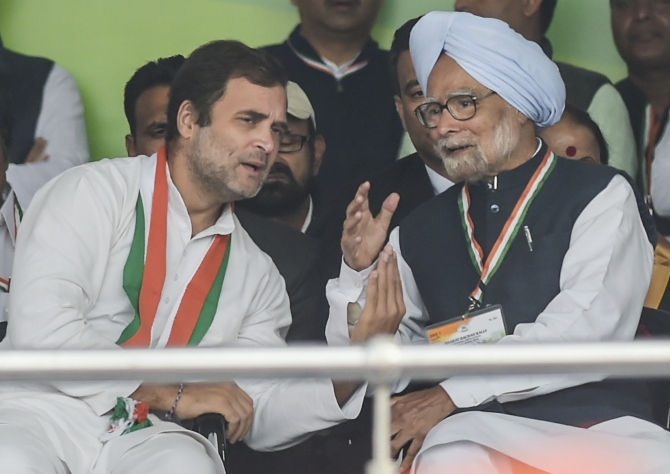 The Congress leader alleged that the BJP and PM Modi have set the entire north east region on fire and states like Assam, Meghalaya, Arunachal Pradesh, Tripura are burning.

"He (Modi) has burnt all these places. He divides people and works towards weakening the country, while you people, who have come here, don't divide India and work with your sweat and blood for taking the country forward.

"Your own country is being weakened and divided and our economy is being destroyed. The reason is that Narendra Modi sees only one thing whether the power is in his hand. He (Modi) only works for being in power. He will destroy everything to achieve power," he said.

Gandhi said PM Modi only "wants to be seen on television all the time" and the people whom he has benefitted by giving them the money "snatched from people", are the ones funding him for marketing himself on the TV.

He said it is only the PM and no other opposition leader who can be seen on television.

The former Congress chief said the country cannot progress as long as there is no money in the pockets of the poor, farmers, labourers and youths. He also recalled that MNREGA was brought as the Congress knew this country could not progress without labourers.

Rahul Gandhi said the GST, which he described as "Gabbar Singh Tax", has led to the highest rate of unemployment in the country in 45 years and a low GDP growth of 4 pc and that too after changing the way GDP is calculated.

"As per the previous method of calculating GDP, it is only 2.5 per cent," he asserted.

The former Congress chief alleged that Modi hit the Indian economy hard, so hard by demonetisation that it has not been able to recover till date.

"You were lied to, you were told this is a fight against black money. But, your money was given to Adani-Ambani," he alleged.

He said the Congressmen are not afraid of anyone and are ready to sacrifice their lives for the country.