Putting an end to speculation about him joining the Congress after being released from jail recently, Dr Kafeel Khan said that he is a doctor and would like to remain so. 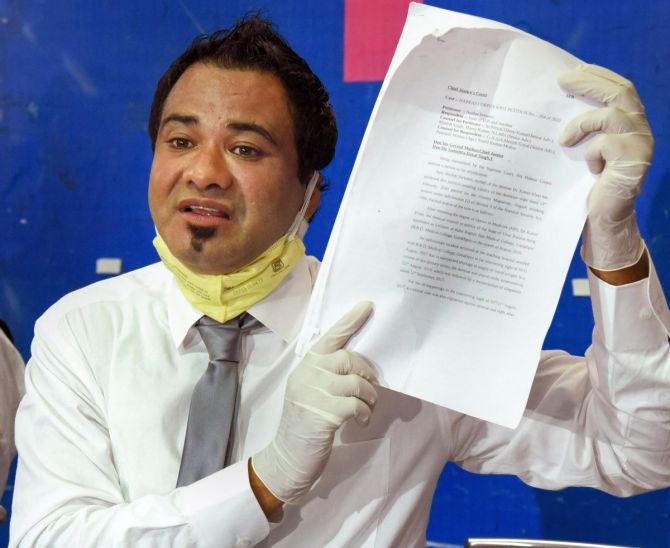 He was recently released from Mathura jail after the Allahabad high court quashed his detention under the stringent National Security Act.

The court had ordered his immediate release, asserting that his speech at the Aligarh Muslim University didn't promote hatred or violence, rather gave a call for national integrity.

Dr Khan, who is presently in Rajasthan, said that he will "not join any political party".

"I am a doctor and would like to remain the same," he said and expressed a desire to visit flood-hit areas of Bihar and help the victims.

He said that when his release was delayed after the Allahabad high court order on September 1, it was feared that the Uttar Pradesh government was preparing to implicate him again in a case.

"Because of the apprehension that I could be implicated in any other case by the Uttar Pradesh government, Congress General Secretary Priyanka Gandhi Vadra had helped me on humanitarian grounds," he said but made it clear that it should not be construed as he is going to join the Congress.

Dr Khan said there has been no discussion regarding politics with Priyanka Gandhi, nor has he got any indication as such from the Congress leader.

"As there is a Congress government in Rajasthan and the distance from Mathura to Bharatpur is of just 20 minutes, Priyanka Gandhi offered me to come to Bharatpur".

He thanked the Congress general secretary saying it was due to her he got "security" in Rajasthan.

Dr Kafeel said that he has written a letter to Uttar Pradesh chief minister Yogi Adityanath urging him to reinstate him to his post at Gorakhpur Medical College so that he can serve the people.

Khan, who worked as a paediatrician at Gorakhpur's BRD Medical College, first hit headlines in 2017 after several children died at the hospital due to the lack of oxygen cylinders.

Initially, he was hailed as a saviour for the children for arranging emergency oxygen cylinders.

However, later, he faced action along with nine other doctors and staff members of the hospital, all of whom were released on bail.

A state government probe had cleared Khan of all major charges, prompting him to seek an apology from the Yogi Adityanath government.

The doctor had alleged that an institutional failure had led to the deaths of the children.

Khan was again arrested in January this year on the charge of delivering a provocative speech at the AMU during the anti-Citizenship (Amendment) Act protests.

After the Allahabad high court ordered his release on September 1, he walked out of Mathura jail late in the night.