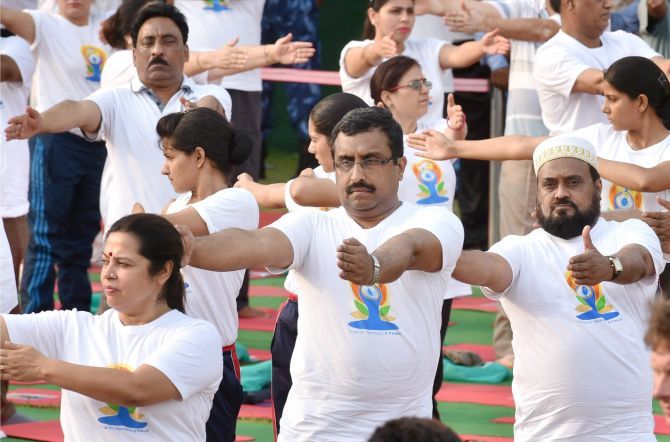 Vice President Hamid Ansari’s office late on Sunday night clarified that he was not invited to the yoga day event in the capital after his absence was questioned by senior Bharatiya Janata Party and Rashtriya Swayamsevak Sangh leader Ram Madhav.

BJP general secretary Ram Madhav stoked a controversy by questioning Vice President Hamid Ansari’s absence at the Yoga Day event in the capital. In a tweet, which has been deleted since the controversy erupted, read, “Two questions. Did RS TV that runs on tax payers money completely black out Yoga Day event? While President participated the VP gave a miss (sic).”

As Twitter raged over the tweets, Madhav deleted them, later saying he had learnt that the VP was unwell.

However, the vice president’s office said that was not correct. “Vice President was not sick. He was never invited for the yoga programme,” it said, adding, “the vice president only attends those programmes in which the minister concerned invites him as per protocol.”

Social media attacked Madhav with some dubbing his criticism of Ansari as ‘shameful and embarrassing’, that he was doing “foot in the mouth asana” and that he can destroy the divinity of yoga in the name of religious fundamentalism.

Madhav also drew flak for making an issue of Ansari’s absence when participation in yoga day events was meant to be voluntary.