Earlier, board's counsel Zafaryab Jilani had said that he is not satisfied with the verdict. 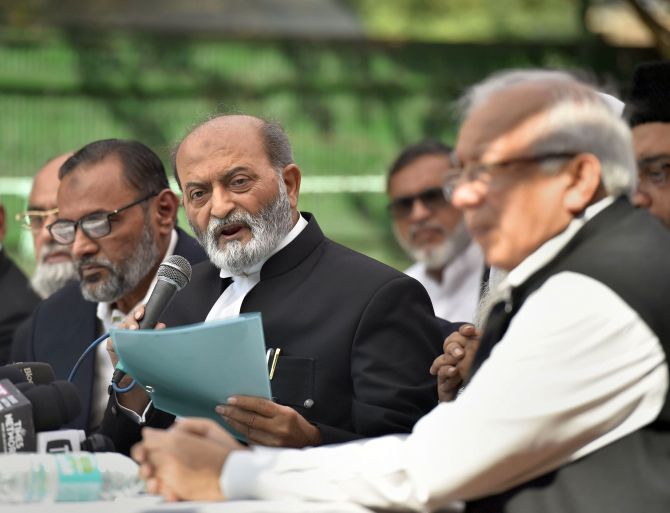 The Uttar Pradesh Sunni Central Waqf Board, one of the main litigants in the Ram Janmbhoomi-Babri Masjid case, on Saturday welcomed the Supreme Court verdict and said it has no plans to challenge it.

"We welcome the Supreme Court verdict in the case. The Board has no plans to challenge it," the Board's chairman, Zafar Ahmad Farooqui said.

"If any lawyer or any other person says that the decision will be challenged by the Board, it should not be taken as correct," Farooqui stressed.

Jilani, however, clarified that the press conference was organised by the All India Muslim Personal Law Board and he had reacted as its secretary and not as the counsel for the Sunni Waqf Board.

The board had last month proposed withdrawing claim on the disputed land with some conditions in the national interest.

Another litigant in the case, Iqbal Ansari, also said he will not challenge the verdict in court.

"We welcome the Supreme Court decision and the biggest happiness is that it is finally curtains down on this long pending issue," Ansari said.

"We will not challenge the court verdict from our side," he said, adding that "we are very happy with the decision."

Ansari said it was always being said that whatever the court will say will be correct.

"We respect the decision. Now this is the responsibility of the government where it provides land for the mosque. This is a sort of victory of the Muslims," he said.

In one of the most important and most anticipated judgements in India's history, the bench put an end to the more than a century old dispute that has torn the social fabric of the nation.

After the verdict was pronounced by a five-judge constitution bench headed by Chief Justice Ranjan Gogoi, lawyers were seen and heard shouting 'Jai Shri Ram' in the Supreme Court lawn.

Senior advocate C S Vaidyanathan, who was the lawyer of deity Ram Lalla in the title dispute, welcomed the judgment, saying it is a victory for the people.

"It is a very balanced judgment and it is a victory for the people of India," he said.

The Nirmohi Akhara said it has no regrets over the Supreme Court saying that it is not a 'shebait' of deity Ram Lalla.

"We have no regrets on this because we were batting for Ram Lalla. The court has accepted Ram Lalla's side and with this, our motive was fulfilled," Nirmohi Akhara member Mahant Dharmdas said.

The court has said in its verdict in the politically-sensitive case of Ram Janmbhoomi-Babri Masjid land dispute in Ayodhya that the Nirmohi Akhara is not a shebait or devotee of the deity Ram Lalla.