News
Business
Movies
Sports
Cricket
Get Ahead
Money Tips
Shopping
Sign in  |  Create a Rediffmail account
Rediff.com  » News » 'Not easy to know when, what will erupt in Kashmir and where'

'Kashmir is complex, conflicted and unpredictable.'
'Take the instance of Handwara and the killings there.'
'The need of the hour is more one of restraint in the violent reactions of the armed forces.'
'But restraint is wanting in Kashmir for a quarter of a century now.' 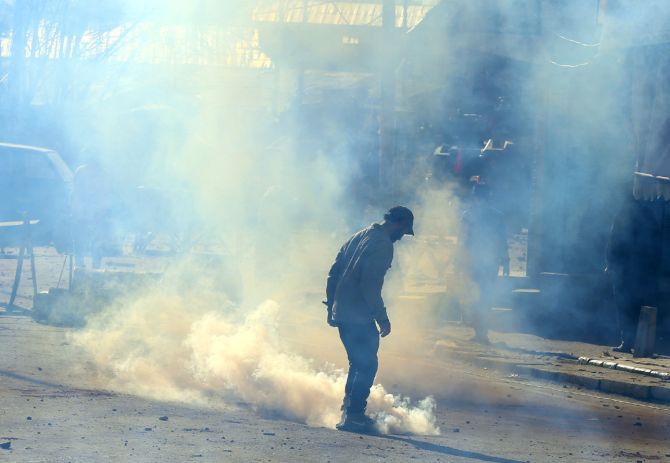 Dr Siddiq Wahid, who received his masters and PhD from Harvard, is currently a Senior Fellow at the Centre of Policy Research, New Delhi.

Over an intermittent connectivity while travelling in Uzbekistan, Dr Wahid replied to questions from Archana Masih/Rediff.com on the current upheaval in Kashmir.

The killing of four young men in Kashmir when the army opened fire on a group of protesters is once again threatening the fragile peace -- what can Chief Minister Mehbooba Mufti do differently to control the situation?

The latter lies in not turning a blind eye to the army, or with eyes towards Delhi.

It lies in being for the people, not for the establishment. It is such things that will 'control the situation,' as you put it.

But I must confess to not having huge expectations on the part of the coalition on any of those fronts.

The separatists called for a bandh, curfew has been imposed in some areas in Srinagar. Is this again going be a summer of discontent in Kashmir if things are not handled well?

Kashmir is discontented to begin with. They have tried to remove that discontent with elections, with promises of developmental monies, with 'good governance'... the list could go on.

It is how the establishment proposes to handle Kashmir. Kashmir needs less 'handling' and more being heard, being understood, and its problems being addressed at root.

How do you see the PDP-BJP coalition relationship in governance sans Mufti Mohammad Sayeed's experience?

The ten months of the coalition with the late chief minister at the helm can hardly be said to have been successful.

As to without him, it is much too early to tell or even to speculate. But no one can be blamed for being sceptical, if not downright cynical, of the future of this 'coalition of opposites,' which is fast becoming one of like-minded parties.

Mehbooba Mufti took three months to take over as chief minister after her father's death. What impact has that gap of not having an elected government at the helm had in the state?

It has resulted in uncertainty, confusion and the I-told-you-so syndrome. None of them are impacts that the J&K state can afford.

She took over at a time when NIT, Srinagar, was on the boil in a locals versus outsiders clash after India's T20 defeat -- how has the state government's handling of the situation been?

Has the government 'handled' it? Even its reaction has been very late!

For starters, Constitutionally, education is a 'state subject' as is law and order. But we have video images of army commandos, central police forces and state police forces standing guard on stage as two investigators are sent post haste by the central government, even as exclusively non-Kashmiri students are allowed to place demands and grievances on a campus of higher education.

I think it is more a case of not having handled the situation.

In Kashmir where passions run high, should the government and police not have anticipated such a situation on campus -- considering instances in the past when there has been cheering for the opposite side in cricket matches.

It is easy, and unfair, to second guess, so I'd not like to speculate.

Kashmir is complex, conflicted and unpredictable. So by definition it is not easy to know when, what will erupt and where.

Take the instance of Handwara and the killings there. The need of the hour is more one of restraint in the violent reactions of the armed forces.

But restraint is wanting in Kashmir for a quarter of a century now. The Handwara killings are a case (or four cases now) that amply prove this. 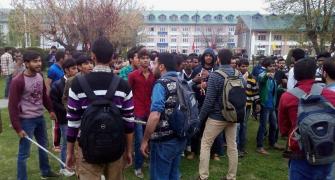 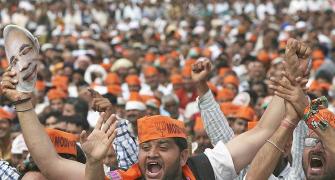 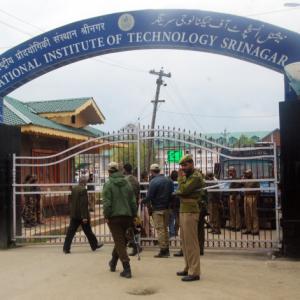