A delegation of Congress leaders, including Lok Sabha MP Gaurav Gogoi and All India Congress Committee general secretaries Jitendra Singh and Ajoy Kumar were stopped at Jorhat airport by the district administration on Wednesday when they were on the way to Nagaland, where the Army gunned down 13 civilians in a botched anti-insurgency operation. 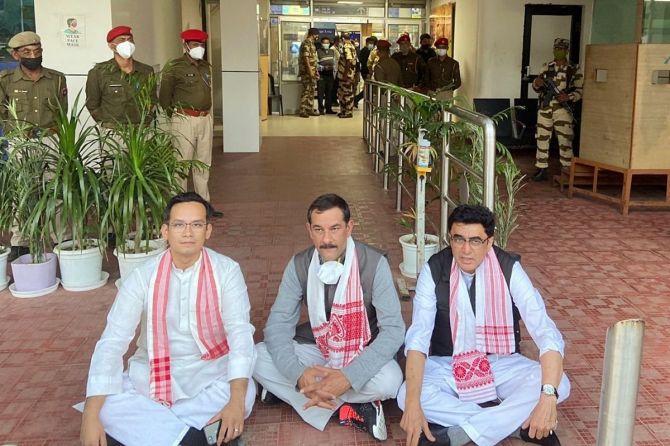 IMAGE: Congress leaders on the way to Nagaland stage a sit-in protest at Jorhat airport after the Assam police stopped them from going ahead, December 8, 2021. Photograph: ANI Photo

The delegation was on teh way to Mon at the instruction of Congress president Sonia Gandhi. Singh is in charge of Assam and Kumar of Nagaland.

They were stopped following an order issued by the Jorhat deputy commissioner Ashok Barman which said that in view of the prevailing law and order situation in Mon district and in bordering districts following Saturday's incident, the movement of civilians and others from Assam side has been restricted by the Nagaland government.

Gogoi said the Congress delegates had been directed by Sonia Gandhi to go to Mon and meet the bereaved families. But the Assam government prevented them from going there.

"Union home minister Amit Shah and Chief Minister Himanta Biswa Sarma are bent on destroying the democratic fabric of the country. We have been prevented from going and so we are sitting on a dharna outside Jorhat airport," he said.

Singh said that the Congress delegation was going to Mon express their condolence to the bereaved families of the slain mine workers but was detained.

"What is surprising is that if there is a law and order problem in Mon then the Nagaland government should have stopped us and not the Assam police. This indicates that there is something that the Assam government is trying to hide which our visit could have exposed," he added.

"Civil liberties and life of the people of Northeast is imperilled and we are being prevented from exposing them," he said.

Congress President Sonia Gandhi had constituted a committee to visit families of the victims of violence in the Mon district of Nagaland and submit a report within a week.

Security forces opened fire on civilians killing 14 and injuring 11 more in Nagaland's Mon district in three consecutive episodes, the first of which was a case of mistaken identity, the police said on Sunday. One soldier also died in the rioting which followed.

In his statement in Parliament on Monday, Shah expressed regret over the Nagaland firing incident and said a probe by a Special Investigation Team will be completed within a month while asserting that all agencies must ensure such happenings do not recur while taking action against insurgents.