Not acting on climate crisis will destroy lives: Experts

The impacts of the climate crisis can be seen around the world and not acting now will destroy lives, livelihoods and natural habitats, environmental experts cautioned on Monday, while reiterating that climate change is happening now and "no one is safe". 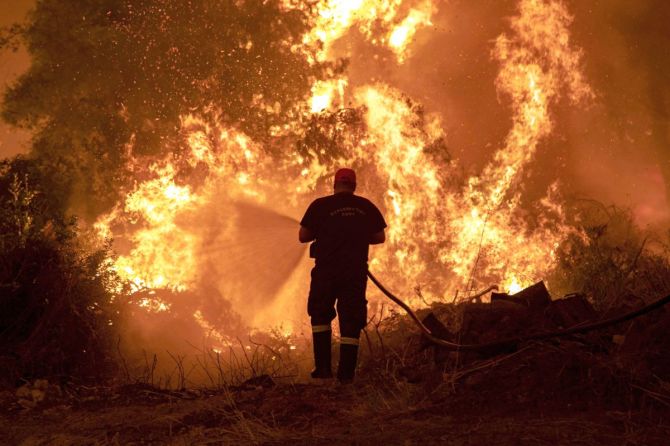 IMAGE: A firefighter tries to extinguish a wildfire burning in the village of Pefki, on the island of Evia, Greece. The report shows that the "lights are flashing red on the climate dashboard". Photograph: Nikolas Economou/Reuters

The reactions came after the launch of the Intergovernmental Panel on Climate Change's latest report, "Climate Change 2021: The Physical Science Basis", which has warned of increased extreme weather events across the globe in the coming years.

At a virtual press conference to launch the report, Inger Anderson, Executive Director, United Nations Environment Programme, said, "Climate change is here and now. No one is safe. Despite warnings from so many years, the world did not listen. We need to act now. Reducing greenhouse gas emissions will not only limit climate change but also reduce air pollution."

She also said recently, only 110 countries of the 191 parties to the United Nations Framework Convention on Climate Change have submitted new or updated nationally determined contributions ahead of the next climate conference (COP 26).

"Governments need to make the net zero plan an integral part of their Paris Agreement. They must finance and support the developing countries to adapt to climate change as promised under the Paris Agreement. Every business, citizen and investor must play their part.

"We cannot undo the mistakes of the past but this generation of political and business leaders and conscious citizens can make things right," Anderson said.

Alok Sharma, president-designate of the upcoming COP26, said the report shows that the "lights are flashing red on the climate dashboard".

"We must come together at COP26 and agree on ambitious emission reduction targets that lead us to net zero by 2050," he tweeted.

Sharma also said, "The science is clear, the impacts of the climate crisis can be seen around the world and if we don't act now, we will continue to see the worst effects impact lives, livelihoods and natural habitats."

He said the next decade is decisive and urged the world to follow the science and embrace their responsibility to "keep the goal of 1.5 degree Celsius alive".

"We can do this together by coming forward with ambitious 2030 emission reduction targets, long-term strategies with a pathway to net zero by the middle of the century and taking action now to end coal power, accelerate the rollout of electric vehicles, tackle deforestation and reduce methane emissions," he said.

"For India, the predictions in this report mean people labouring in longer and more frequent heat waves, warmer nights for our winter crops, erratic monsoon rains for our summer crops, destructive floods and storms that disrupt power supply for drinking water or medical oxygen production.

"We need to plan for climate risks while building our cities. We need technology that revolutionises the way we manufacture -- with green hydrogen and with recycling. And we need to use our land and natural resources responsibly to support livelihoods," she said.

"The most important point from the IPCC AR6 report is that the mitigation and adaptation strategies submitted by nations (known as Nationally Determined Contributions or NDCs) through the Paris Agreement are insufficient to keep global surface temperature increase within 1.5 degrees Celsius or even 2 degrees Celsius. With the global mean temperature rise now going above 1 degree Celsius, India is at a crucial juncture where we are already facing increasing extreme weather events such as cyclones, floods, droughts and heatwaves.

"Climate projections unanimously show that all these severe weather conditions will become more frequent and intense with temperatures going up since we humans are not sufficiently curbing the emissions," he said.

Koll added that India needs to urgently map the risks based on these projected changes, "but we do not even have a country-wide risk assessment based on observed changes. We might need to redesign our cities. Any kind of development should be planned based on an assessment of these risks -- whether it is expressways, public infrastructure or even a farm or a house".

Mathur, who is also the DG of The Energy and Resources Institute, said the global energy sector (power, heat and transport) accounts for around 73 per cent of total emissions, while reiterating that solar energy offers an ideal solution to all countries.

"It is also the engine behind every country's economic and developmental plans and ever more so in the emerging and developing economies where the quality of life and the accompanying energy consumption is less than the global average. And so it becomes ever more important for us to be able to meet our growing energy needs without adding more CO2 to the atmosphere.

"Solar energy offers an ideal solution to all countries. The technology is ready and it is cost effective. We need global collaboration to scale it up exponentially and expeditiously," he said.