Mugabe, wife 'in custody'; not a coup, says Zimbabwean army 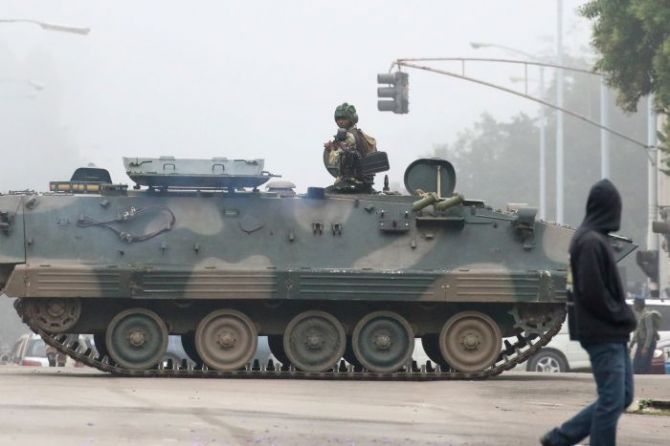 The Zimbabwe Army on Wednesday sought to reassure the country that it wasn't a military coup or takeover, in a statement after taking over the state broadcaster and amid a night of unrest.

The army added that President Robert Mugabe was safe and sound, and the military was targeting 'criminals around him' who have sent the nation spinning into economic despair.

It also said that it has President Mugabe and his wife in custody and was securing government offices and patrolling the capital's streets.

South Africa's President Jacob Zuma said he spoke to Mugabe, who was 'fine' but confined to his home.

'As soon as we have accomplished our mission, we expect that the situation will return to normalcy,' the Washington Post quoted an army spokesman, as saying.

The military broadcast instructed all members of the defence forces that 'all leave is cancelled (sic)' and they were to 'return to barracks with immediate effect'.

'We call upon all the war veterans to play a positive role in ensuring peace, stability and unity in the country. To members of the Zimbabwe defence forces, all leave is cancelled and you are all to return to your barracks with immediate effect.

'To the other security forces we urge you to cooperate for the good of our country. Let it be clear we intend to address the human security threats in our country.

'Therefore any provocation will be met with an appropriate response,' the statement said. 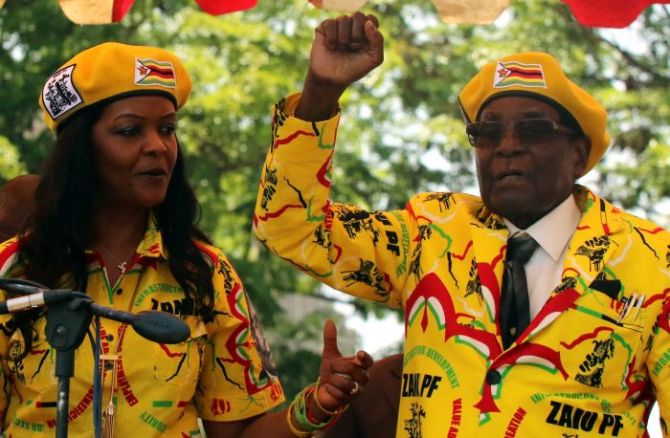 'To the judiciary, the measures underway are intended to ensure that as an independent arm of the state you are able to exercise your independent authority without fear of being obstructed, as has been the case with this group of individuals.

'To our members of parliament, your legislative role is of paramount importance, of peace and stability in this country, and it is our desire that a dispensation is created that allows you to serve your respective political constituencies according to democratic tenets.

'To the generality of the people of Zimbabwe, we urge you to remain calm and limit unnecessary movement.

'However, we encourage those who are employed and those with essential business in the city to continue their normal activities as usual. Our wish is that you will enjoy your rights and freedoms and that we return our country to a dispensation that allows for investment, development and prosperity that we all fought for and for which many of our citizens paid the supreme sacrifice.

'To political parties, we urge you to discourage your members from engaging in violent behaviour.

'To the youth, we call upon you to realise that the future of this country is yours. Do not be enticed with the dirty coins of silver, be disciplined and remain committed to the efforts and values of this great nation.

'To all churches and religious organisations in Zimbabwe we call upon your congregations to pray for our country and preach the gospel of love, peace and unity and development.

'To both our people and the world beyond our borders, we wish to make this abundantly clear this is not a military takeover of government. What Zimbabwe defence forces is doing is to pacify a degenerating political, social and economic situation in our country,' the statement added.

The military spokesman who read the statement has been identified as Major General S B Moyo, The Guardian reports.

The army took control of the state Zimbabwe Broadcasting Corporation late Tuesday and an army spokesman made the statement on air early Wednesday. 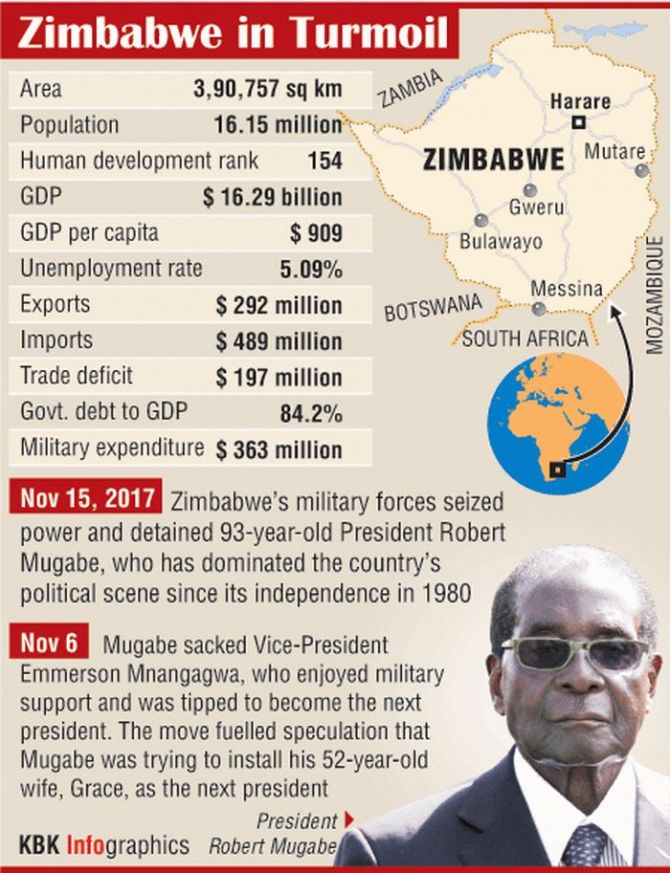 Tension had been building within Zimbabwe since Mugabe last week fired Emmerson Mnangagwa as vice-president, accusing him of plotting to take power from the 93-year-old President.

Mnangagwa had been in the government for decades and was a soldier during the nation's war for independence in the 1970's. He was also considered as the successor of the resident and is popular with the military.

This brought the situation to the overnight's when at least three explosions were heard in the Zimbabwian capital and military vehicles were seen in the streets after the army commander had threatened to 'step in' to calm political tensions.

The Zimbabwean soldiers, then, with the Zimbabwe Defence Forces seized control of the state broadcasting outlet in the wee hours of the Wednesday morning.

For the first time, this southern African nation is seeing the military oppose the 93-year-old Mugabe, the world's oldest head of state and one of the longest-serving authoritarian rulers.