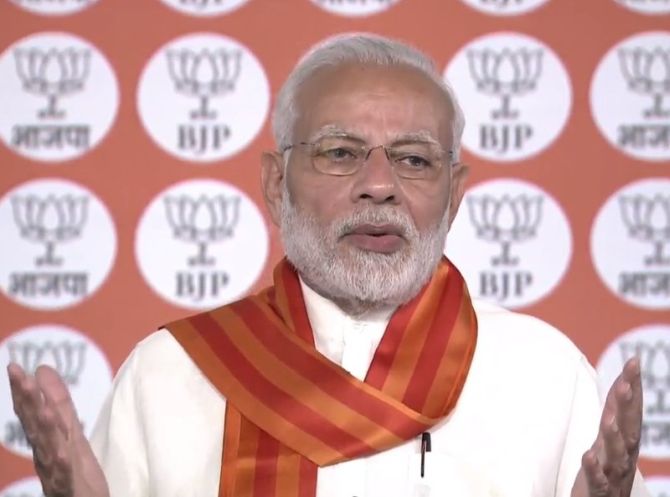 After Raj Babbar and C P Joshi, another Congress leader has added to the party's embarrassment by making controversial comments about Prime Minister Narendra Modi's lineage.

Former Union minister Vilas Muttemwar made the comments at a party meeting in Rajasthan on Saturday.

The video of his speech has gone viral on social media.

Muttemwar, who hails from Vidarbha region, told PTI that the video in circulation was distorted.

"It was an internal party meeting yesterday. The person who shot the video distorted it and posted it online," he said.

The Congress leader said it was a fact that people of the country knew who Rahul Gandhi's father was but not many knew about Modi's father.

"The world knows past generations of Rahul Gandhi but no one knows who Modi's father was," he said.

Babbar had likened the falling rupee to the age of Modi's mother, after Joshi's casteist remark on the PM and Union minister Uma Bharti.

"Before becoming PM, Narendra Modi used to say that the value of the rupee has fallen to a level where it is almost the same as the age of the then-PM (Manmohan Singh). Now, it is inching towards the age of Modi's respected mother," Babbar had said.

Addressing a poll meeting in Rajasthan on Thursday, Joshi had reportedly said that Prime Minister Narendra Modi, BJP MP Uma Bharti and Hindu activist Sadhvi Ritambhara are from 'lower castes' and know nothing of Hinduism.

He said it is the Brahmins who are learned and know of Hinduism.