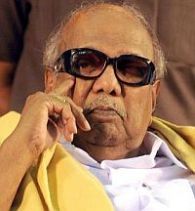 Days after sending feelers to the Communist Party of India-Marxist and CPI which had quit the All India Anna Dravida Munnetra Kazhagam-led alliance, Dravida Munnetra Kazhagam chief M Karunanidhi on Saturday said no talks had been held with them so far and declined to commit on the number of seats they would be offered if they joined the Democratic Progressive Alliance.

"Not so far," was his response when reporters asked him if there was any chance of the CPI-M and CPI joining the DMK-led DPA and if talks had been held in this regard.

Asked how many seats he would allot in case they joined the alliance, he said, "(I) cannot be responding to these (questions)."

To another question whether he was confident that they would join his alliance, he said "I had only said (earlier) that we will welcome them if they come; not that they will come."

Meanwhile, the CPI-M, party sources said, was 'firm' on facing the polls alone as it plans to counter the Congress over a slew of issues including scams and this includes the 2G spectrum allocation in which DMK leaders are accused.

A section of the CPI leaders were supportive of a tie-up with DMK but clarity will emerge after discussions between senior leaders in Delhi, party sources said.

Both the parties maintained that they were not involved in any discussions with the DMK.

The CPI-M and CPI had walked out of the AIADMK alliance early this week miffed over the Jayalalithaa-led party's reported offer of only one seat each to them whereas they had staked claim for three each.