Nagaland Governor R N Ravi on Monday made it clear that there would be no separate flag and constitution, amid persistent demand for these by the National Socialist Council of Nagaland-Isak Muivah to achieve a solution to the Naga political issue. 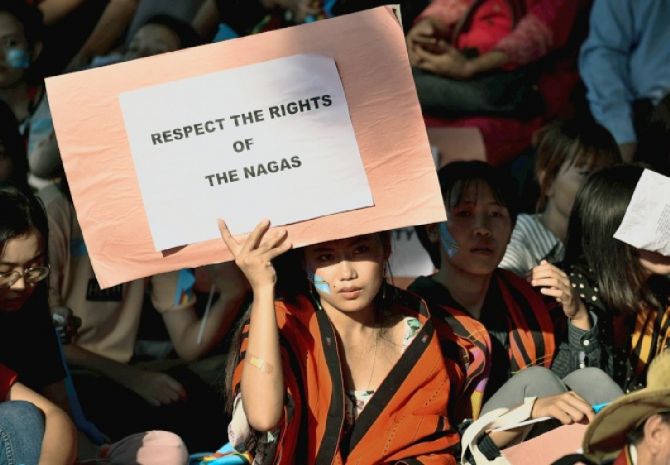 In his message to the people on the eve of 58th Statehood Day, Ravi, the interlocutor for the Naga peace process, said the essence of India is its unity in diversity, on the demand for integration of Naga inhabited areas in other states, especially Assam, Manipur and Arunachal Pradesh.

Anyone talking anything contrary is peddling preposterous lies, he said.

"They are trying to confuse and mislead the people," he added.

Multitudes of ethnicities, languages, cultures and cuisine enrich this beautiful country -- from Kerala to Kashmir and Kohima to Kutch, he said.

Maintaining that Nagaland currently stands at the crossroads of history, Ravi said the right decision taken will determine the future and the destiny of the coming generations.

With common understanding having been reached on all the issues and conclusion of talks on October 31, 2019, the people of Nagaland are anxiously waiting for the new dawn, he said.

Ravi, without taking any names, lamented that there are some people who are standing as a roadblock to the aspirations of the people of Nagaland.

See the writings on the wall, come out of the make-believe echo-chamber and listen to the voice of the people and in a true democratic spirit respect their wishes, he urged them.

The Governor called upon the people of the state to commit to reclaim the state from violence and desolation and restore the glories it deserves.

Ravi said that the statehood day is celebrated with all the gaiety and cultural splendour amid the Hornbill Festival, but due to the COVID-19 pandemic this year, it could not be done at that scale.