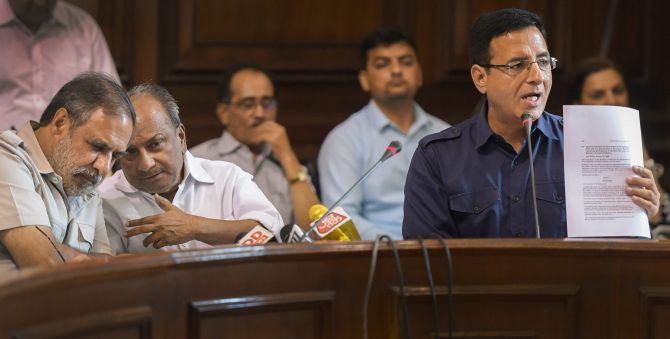 In a fresh offensive, the Congress on Monday said there was no secrecy clause in a 2008 Indo-French pact forcing the government not to divulge the price details of the Rafale deal, and accused Prime Minister Narendra Modi and Defence Minister Nirmala Sitharaman of “lying” in the Parliament on the issue.

Days after Congress president Rahul Gandhi assailed the government in Parliament over the Rafale deal, the party fielded three of its top leaders -- former defence minister A K Antony, Anand Sharma and Randeep Surjewala -- who demanded the Modi dispensation must reveal the price details of the aircraft.

The leaders also released a copy of the confidential agreement the United Progressive Alliance government had signed with France in January 2008, to drive home the point that it does not restrict India to reveal the price details of the Rafale deal.

They also indicated that Congress may give a privilege motion notice against the prime minister and Sitharaman.

According to the copy of the agreement released by the Congress, both French and Indian governments, in accordance with their national laws, shall take all measures necessary for the protection of classified information and material provided to them under it or in accordance with agreements, contracts or sub-contracts concluded between or by the two sides or by their authorised agencies.

In his address during the debate on the no-confidence motion against the government on Friday, Gandhi had said that French President Emmanuel Macron had told him during a meeting here earlier this year that there was no secrecy pact that restricts India from revealing price details of Rafale aircraft.

After Gandhi’s remarks, the French foreign ministry had said France had signed a security pact with India in 2008 which legally binds the two countries to protect the classified information which could impact security and operational capabilities of the defence equipment.

In his reply to the motion, Modi asked Gandhi to not make such “childish” allegations on such sensitive issues having security implications, while Sitharaman completely rejected the Congress leader’s charges.

The 2008 pact was renewed during Macron’s visit here in March as the agreement had lapsed.

In Monday’s press conference, Antony said the government’s claim that a secrecy clause in the pact was forcing it to not reveal price details of the deal was “totally wrong”.

They have to reveal price details of each aircraft, said Antony, adding that the more they are trying to hide, the more suspicion there is about the deal.

Antony also said the government cannot hide the price details of the Rafale jets as the deal has to be scrutinised by the Comptroller and Auditor General as well as Parliament’s Public Accounts Committee.

“They must reveal the price details of the aircraft and they must also tell us why a company was selected as offset partner which has no experience manufacturing aircraft,” said Antony, alleging the private player has benefited by crores.

His colleague Anand Sharma said the government owes Parliament an explanation on why Modi and Sitharaman “misled” the nation on the price issue.

“The French government had no objection in revealing the price of the Rafale aircraft. This was conveyed by the French president to Rahul Gandhi during a meeting in which I was present along with the former prime minister,” he said.

Surjewala said the prime minister and the defence minister misled Parliament on the issue and it is clearly a matter of breach of privilege.

Asked if the Congress would give a notice of privilege motion against the prime minister and the defence minister, he said, “The issue pertains to the Lok Sabha and the leader of the Congress parliamentary party will take a decision on the issue soon.”

According to the Congress leaders, the prime minister “sought to hide behind a cloak of pseudo-nationalism in the Rafale deal” during the debate on the ‘no-confidence motion’ against the government in Parliament on July 20.

The truth, however, is that the “Modi government is unforgivably guilty of compromising national interest and national security in the Rafale deal”, they said.

“Shoddy cover-up, self-defeating assertions and deliberate lies are being dished out to divert, dupe and deceive. Grave apprehensions and claims of insurmountable loss being caused to public exchequer stand exposed as the government refuses to state the truth,” the statement said.

It said new revelations in the Rafale deal “nail the doublespeak, lies and hypocrisy of the Modi government”.

The Congress has been ramping up attack on the government over the Rafale issue, claiming that the deal negotiated under its rule was much cheaper than the contract signed by the Modi government to procure 36 Rafale fighter jets from France at a cost of Rs 58,000 crore.

The party has been demanding details, including cost of equipment and weapons, but the government has refused to share them citing a secrecy pact with France.

The Congress had claimed that the per aircraft price under the deal inked by the National Democratic Alliance came to Rs 1,600 crore as against the Rs 520 crore negotiated during the UPA.

The UPA government floated a tender in 2007 for purchase of 126 Medium Multi-Role Combat Aircraft for the Air Force and, post negotiations, two of them -- Rafale and Eurofighter Typhoon -- remained in the reckoning.

However, the deal could not be finalised by the UPA regime.