Amid speculation of leadership change in Karnataka, Bharatiya Janata Party national general secretary in-charge of the state, Arun Singh, on Thursday ruled out replacing the chief minister and asserted that B S Yediyurappa will continue in the top post. 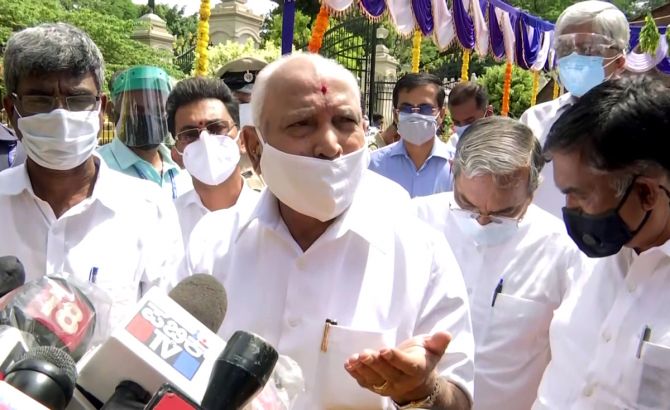 Addressing reporters in Delhi, he said no discussions have happened at the high command level regarding seeking the resignation of the chief minister.

"Yediyurappa is doing a good job as the CM, he is working hard along with ministers and legislators, organisation is also functioning well… he will continue (as CM)," Singh said even as he termed the talks about replacing the CM and state party president Nalin Kumar Kateel as "rumour" and "imaginary".

Speculation has been rife for some time now that efforts were on by a section of the ruling BJP to exert pressure over unseating Yediyurappa.

Amid these reports, Yediyurappa on Sunday said he will continue in the top post as long as the BJP high command has confidence in him, and he had no confusion about it.

Responding to a question on Yediyurappa's statement, Singh said the chief minister as a loyal party worker has expressed his faith in the leadership.

".. Our high command is such that everyone, whether it is state presidents, chief ministers and leaders, have faith in the high command.”

On open statements being made by some MLAs and leaders against the state leadership and the CM, Singh said no one should make such public statements, and explanations will be sought from those who have indulged in such activities.

"If one has any issues, they can talk to me when I go there, but no one should make a public statement," he said.

Leaders like MLA Basanagouda Patil Yatnal and MLC A H Vishwanath have been embarrassing the government with their statements, and Tourism Minister C P Yogeshwar recently got added to the list.

To a query on MLAs indulging in signature campaigns, Singh said the legislators should work for the welfare of the people of their constituency.

"If any legislator has any grievances, I'm visiting the state and will hear them," he said.

Following a series of political statements regarding attempts to replace Yediyurappa, his political secretary and MLA M P Renukacharya had claimed having a letter signed by more than 65 legislators in his favour.

However, Yediyurappa and the state leadership had asked MLAs not to indulge in signature campaigns and instead focus on Covid management in their respective constituencies.

Singh said he is likely to visit Karnataka for three days next week, but gave no clarity whether a legislature party meeting will be convened during his visit.

"..Will see after going there," he said.

Some BJP legislators are said to be pushing for a legislature party meeting, pointing to certain decisions taken by the government, its functioning, handling of the Covid crisis and alleged instances of corruption, among others.