No power to de-register parties: Chawla

The Election Commission on Saturday expressed concern over the registered political parties which do not contest polls but said it has no power to de-register them.

There were roughly over 700 such political parties out of 1,000 which have not contested polls, Chief Election Commissioner Naveen Chawla told reporters on the sidelines of 6th National Conference on Electoral Reforms organised by NGO - National Election Watch in New Delhi.

"We don't have power to de-register such parties," he said, adding that the commission sends reform proposals to the Centre from time to time.

"We are going to hold talks with the Centre in May-June on our reform proposals, including on such political parties,"
he said.

Asked about Madhya Pradesh Chief Minister Shivraj Singh Chouhan's frequent demand that the Lok Sabha and Assembly polls should be held simultaneously, Chawla said he will not comment on the matter.

He said this plan was first suggested by former vice-president Bhairon Singh Shekhawat and asked what will happen in case an elected government loses majority soon after winning polls. 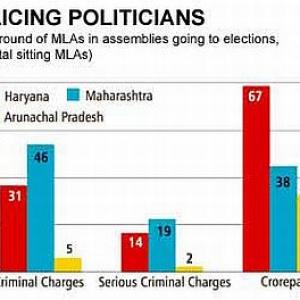 Will you vote for these politicians?