No power in world can stop us from resolving Kashmir issue: Rajnath 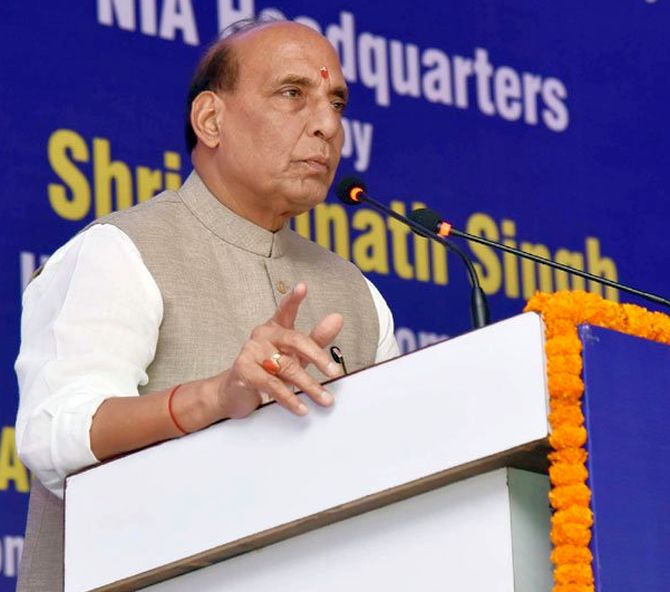 Union Home Minister Rajnath Singh on Saturday said that no power in the world can stop the government from resolving the Kashmir issue and hit out at Pakistan for its "impious" activities against India.

Singh said the NDA government has given a free hand to the Army to act against terrorists and give a befitting reply to any firing from across the border in Kashmir.

"I would like to say that nobody needs to be worried about Kashmir. No power in the world can stop us from resolving the issue," he said.

Addressing a gathering in Bardoli in Surat district as part of the BJP's 'Gujarat Gaurav Yatra', Singh attacked Pakistan saying it sends terrorists into India and wants to break the country.

"Pakistan is our neighbouring state. Its name is 'Pak'-istan, but it regularly indulges in 'napaak' (impious) activities, tries to break India and sends terrorists into India," he said.

"Our Prime Minister Narendra Modi tried his best (for peaceful resolution of bilateral issues) considering that Pakistan is our neighbouring state. He even went to Pakistan breaking all protocol, but Pakistan is not refraining from its activities. This can't continue for long," he said.

The home minister said he has asked the Army to reply with bullets to Pakistani firings on the Kashmir border instead of showing the "white flag" (of peace).

"We have given a free hand to the Army. I have said you are free to act against terrorists," Singh said, adding this has resulted in a "record" number of militants being killed in Jammu and Kashmir in 2016-17.

"We do not need to tell you the numbers. Someines it is one (militant) in a day or two or four or six. The jawans of our Army keep greeting them with 'Jai Sri Ram.' It has never happened before that militants have been killed in such a large number," the Minister said.

Singh recalled how a few months after the Modi government came to power in May 2014, he had given standing orders to the BSF DG to stop the practice of showing "white flags" to Pakistan in response to their firings at the Indo-Pak border.

Singh said he came to know about the practice after he talked to the BSF chief following news that five Indian citizens had been killed in firing by Pakistani personnel.

He (The BSF DG) "told me it is an old practice to show white flag in response to Pakistani firing... this is to tell them that we want peace. I asked the DG as to what was Pakistan response to our flags being shown 16 times.

"He said Pakistan did not show any white flag. On telephone I told him not to show white flag for the 17th time. And it is my standing order that while first bullet shall not be fired by India, if we receive even a single bullet, we will retaliate," he said.

Singh said had Sardar Vallabhbhai Patel, the country's first deputy prime minister who launched a satyagrah (in support of farmers) during the British rule from Bardoli in 1928, been allowed by Prime Minister Jawaharlal Nehru to act freely, India would not have been facing the Kashmir issue.

"Sardar Patel got Junagad and Hyderabad to become part of the country. Had Pandit Jawaharlal Nehru not stopped him from also deciding the fate of Kashmir, then, I think, the Kashmir issue would not have been before us today," he said.

The BJP has launched the `gaurav yatra' to galvanise support ahead of the assembly elections in Gujarat. A number of BJP leaders and Union ministers have taken part in the campaign and addressed rallies.