No panic now so no free food-grains for migrants: Govt

The government on Monday ruled out the possibility of free food-grains distribution to migrants saying there is no panic situation and no complete national lockdown unlike last year. 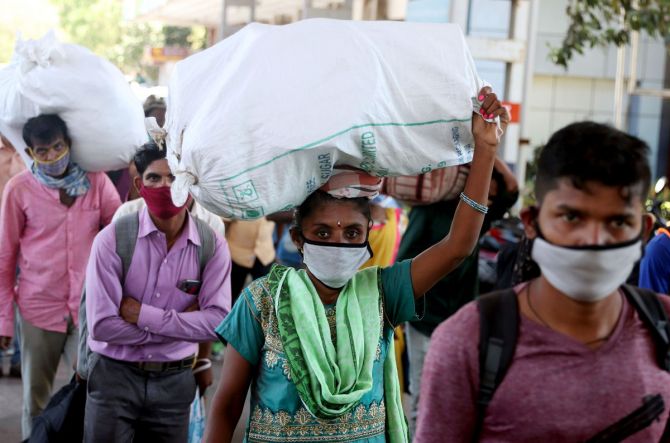 IMAGE: Migrants arrive at MGR Central railway station in Chennai to board a train to their native places, May 10, 2021. Photograph: Anantha Krishnan / ANI Photo.

However, the government has started distributing additional free grains again under the Pradhan Mantri Garib Kalyan Anna Yojana (PMGKAY) for two months -- May and June -- to 80 crore ration cardholders.

The government said there is no impact on prices of food-grains in the open market due to free grains distribution under PMGKAY.

"Migrant crisis is not as big as it was last year. ... It is not a complete national lockdown. It is a local lockdown, industry is working. The complete lockdown is not there. That panic is also not there," Food Secretary Sudhanshu Pandey said in a virtual press meet. Those migrants, who have gone back to their villages, are availing ration supply either through state or central ration cards, he said.

The secretary was responding to a query why the government has not announced a free grains scheme for migrants amid the resurgence of Covid cases.

Last year, the government had distributed 6.40 lakh tonnes of food-grains for free to migrants and stranded migrants.

Stating that there is an increase in use of ration card portability service during the pandemic year since April 2020, Pandey said almost 18.3 crore portable transactions have taken place during the Covid period, out of the total 26.3 crore transaction ever since this service was launched in August 2019.

"This is a very startling figure, which shows people have made use of the portability service quite extensively," he added.

The secretary said, "So far, states have lifted 40 per cent of their monthly quota under PMGKAY. We hope the distribution for the month of May is as per the schedule.”

Under PGMKAY, additional 5 kg grains per beneficiary per month is given via ration shops. This is over and above the existing quota given under the National Food Security Act (NFSA).

As per official data, a little over 1 lakh tonnes of food-grains has been distributed for free so far this month. Against the monthly allocation of 39.69 lakh tonne under PMGKAY, already 13 states including Maharashtra and Jharkhand have lifted the 15.55 lakh tonnes of grains, the data showed.

To ensure sufficient supply of wheat and rice in the open market, the government has started selling grains to bulk consumers under the Open Market Sale Scheme (OMSS) at lower rates.

Asked about any impact of grains distribution under PGMKAY and OMSS in the open market, the secretary said: "The wholesale price of wheat and rice are in positive territory. They are not crossing the 2 per cent rate of increased inflation. So, that means food inflation is under check."

On food-grains procurement directly from farmers, Pandey said the government was procuring more and more wheat and rice at minimum support price (MSP) since last year to give "succour" to farmers in the time of pandemic.

Timely payment of MSP to farmers is also being made through direct bank transfer (DBT) in most states. But the recent shift to DBT to farmers in Punjab from April has been "smoother and beyond expectations," he said.

Against the target of 427 lakh tonnes of wheat, about  337 lakh tonnes has been procured so far in the 2021-22 rabi marketing season (April-March), up by over 36 per cent from 248 lakh tonnes in the year-ago period, he said.

"An open-end wheat and rice procurement is followed. This is the reason we are procuring extra. This is being done purely in the interest of farmers even though under the NFSA our distribution is 2/3rd of procured quantity only."

There has been higher procurement and payment to farmers since last year as the government had additional responsibility to provide "succour" to farmers because the markets were disrupted, private markets were not coming forward due to Covid conditions besides demand for grains had reduced in the market, he added.

The secretary also said that a long term solution is required to manage the surplus and the government is working in this regard.

Asked if farmers are facing any pressure from arthiyas (commission agents) in Punjab after shifting to DBT for payment of MSP, the secretary said: "No change is very smooth. This change has been much smoother and beyond expectations of both Punjab and the central government."

It was smooth because both Punjab and the central government worked together. "And arthiyas also realised their share of commission of nearly 2.5 per cent is intact and the government remains committed to paying that commission to arthiyas."

On storage issues amid rise in grain procurement, the Secretary said the government has already made transportation and storage arrangements.

"There is daily movement of 30-35 rakes. The railways has assured that it would give 45-50 rakes daily for movement of grains," he said.

As offtake increases for distribution, movement will also speed up. The government has a storage capacity of over 160 lakh tonnes and has decided not to store this year grain in CAP (cover and plinth).

"We hope there won't be any problem," he added.

Source: PTI© Copyright 2021 PTI. All rights reserved. Republication or redistribution of PTI content, including by framing or similar means, is expressly prohibited without the prior written consent.
Related News: PMGKAY, PGMKAY, MSP, DBT, NFSA
SHARE THIS STORY
Print this article