No one should fear in Modi's India: Shah replies to Oppn 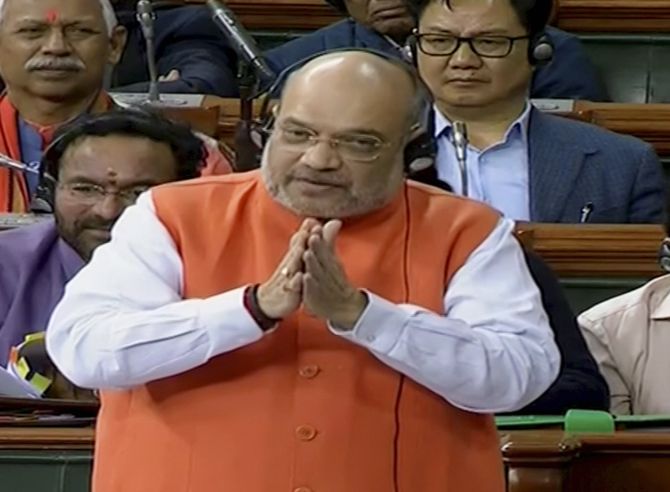 Union Home Minister Amit Shah on Monday said people belonging to any religion should not have any fear under the Modi government as he asserted that the Citizenship (Amendment) Bill would give relief to those minorities who have been living a painful life after facing persecution in neighbouring countries.

Shah also said the Modi government will definitely implement the National Register of Citizens (NRC) across the country and when it will be done, not a single illegal immigrant will remain in the country.

In a hard-hitting reply to a debate on the proposed legislation, which seeks to give citizenship to non-Muslim refugees from Pakistan, Bangladesh and Afghanistan, Shah said there is difference between illegal immigrants and those who have come after facing religious persecution in the three neighbouring countries.

"No one should have any fear of being persecuted under the Narendra Modi government," he said after nearly seven-hour-long debate which was marked by fiery speeches by MPs belonging to both the opposition and the ruling alliance.

The home minister said had India not been divided on religious lines in 1947, there was no need for the Citizenship (Amendment) Bill.

The home minister said the Citizenship Bill will give relief and constitutional respect to those people who have been living a painful life after facing persecution in neighbouring countries.

Shah dismissed the suggestions that the bill is violative of Article 14 of the Constitution, which guarantees equality for everyone, as it aims to give citizenship to persecuted people only.

"This bill is not unconstitutional and not in violation of Article 14 and has nothing to do with Muslims in India," he said but made it clear that Rohingya Muslims, coming from Myanmar, will not be given Indian citizenship.

The home minister countered the Congress charges that the bill is communal in nature, by taking a dig at the opposition party, saying, "Congress is such a secular party which partners Muslim League in Kerala and Shiv Sena in Maharashtra."

"Modi government's only religion is the Constitution," he asserted.

He also said India doesn't need a refugee policy as the country has enough laws for the protection of refugees.