News
Business
Movies
Sports
Cricket
Get Ahead
Money Tips
Shopping
Sign in  |  Create a Rediffmail account
Rediff.com  » News » No one is bigger than state, says Chidambaram

No one is bigger than state, says Chidambaram

In a veiled attack on Gujarat Chief Minister Narendra Modi, Finance Minister P Chidambaram on Wednesday said nobody can claim to be equivalent to the state as such an assertion is detrimental to democracy but admitted the Bharatiya Janata Party-ruled state is progressing at a "satisfactory" rate.

"In a democracy, no one can say 'I am the state'. No individual can become the state. No one voice should be heard. Democracy thrives on plurality of voices, not in one person's voice," he said on eve of first phase of voting in Gujarat.

"But what I find in Gujarat is...I, me, I alone, I am the state. That is not democracy. What we want is a collective leadership, the leader is first among equals.

"We don't believe in I am the state theory, which is detrimental to democracy," he told a press conference.

Chidambaram, however, did not name Modi.

Gujarat is progressing at a "satisfactory" rate, but it needs to be questioned whether this development is reaching every section of the society, he stated.

"Gujarat needs the change of direction, the change that requires not the growth of fewer or small section but of the whole society. No one should be left behind.

"In Gujarat large sections of society are left behind, in particular tribals, women, minorities and Dalits. Also, entire Saurashtra is left behind," he said.

"If growth is skewed, lopsided then that's not inclusive growth," Chidambaram maintained.

"Claims are being made that Gujarat is among the top ranking states in the country. There are many states which are ahead of Gujarat in terms of human development indicators, in terms of per capita income.

"Gujarat has the capacity to catch up with these states. But that requires a new leadership, a new government which cares for all sections of the society," he said, appealing to voters to give Congress a chance in the state. 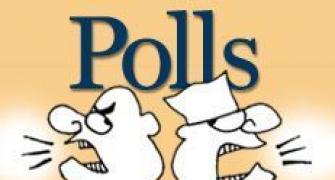