Village pradhan or PM, no one above law: Modi asks to follow COVID-19 rules

Prime Minister Narendra Modi on Tuesday lamented that people are becoming increasingly negligent in personal and social behaviour since the coronavirus-induced curbs were eased under 'Unlock-1' from June 1, and said everyone needs to follow the rules, be it a village pradhan or the head of the government. 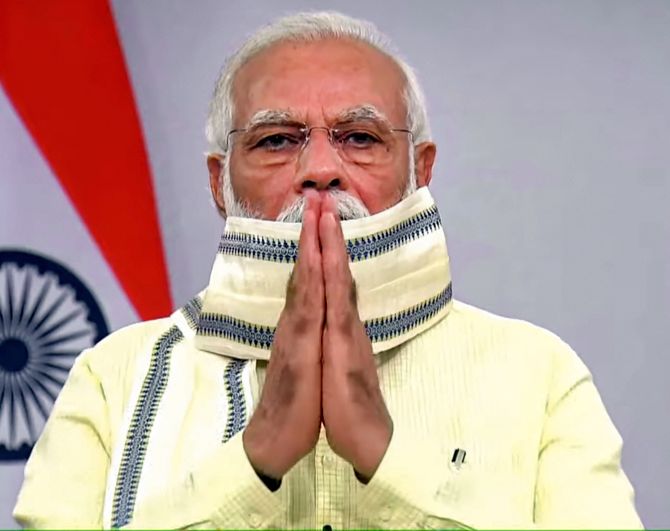 In his address to the nation, the prime minister also observed that rules were followed very strictly during the nationwide lockdown imposed on March 25, adding there is a need to be alert and more careful during the 'Unlock' phase.

"But we have also seen that since 'Unlock-1', there is increasing negligence in personal and social behaviour. Earlier, we were very careful with respect to wearing of masks, social distancing and washing of hands for 20 seconds. But today, when we need to be more careful, increasing negligence is a cause of worry," he said.

During the unlock phase, governments, local bodies and people need to show similar alertness. "We especially need to focus more on containment zones," he stressed.

The country has been witnessing a rapid surge in coronavirus cases since June one.

"Those not following the rules will need to be stopped and cautioned," he said.

"You must have seen in the news, prime minister of a country was fined Rs 13,000 for not wearing a mask in public place. In India too, the local administration should work with the same enthusiasm. This is a drive to protect the lives of 130 crore people. Be it a village pradhan or the prime minister, no one is above the law in India," Modi asserted.

Modi was referring to the example of Bulgarian Prime Minister Boyko Borissov who was recently fined for not wearing a mask in the public.

"As the country enters Unlock-2, we are also entering the season of increasing cases of cough, cold and fever. I, therefore, request all of you to take special care of yourselves," he said.

The country will be entering "Unlock-2" from July 1 for which guidelines were issued by the Union home ministry on Monday night for further easing of the restrictions imposed due to the lockdown.

Modi also said that considering the COVID-19 death rate, India is comparatively in a better position compared to many countries of the world.

"Timely imposition of lockdown and other decisions have saved lakhs of lives," he said.

With 18,522 people testing positive for COVID-19 in a single day, India's case count reached 5,66,840 on Tuesday while the death toll rose to 16,893 with 418 new fatalities, according to the Union Health Ministry data.

The number of active cases stands at 2,15,125, while 3,34,821 people have recovered, and one patient has migrated, according to the updated data at 8 am on Tuesday.

"Thus, around 59.07 per cent of patients have recovered so far," an official said.

Referring to the COVID-19 pandemic in his monthly "Mann ki Baat" radio address on Sunday, the prime minister had urged the people to be more vigilant in the unlock phase and take necessary precautions, stressing that not doing so will put at risk their lives and those of others.