No New Year celebrations until govt accepts our demands: Farmers

Thousands of farmers protesting at the Singhu border for over a month now will ring in the New Year sans any celebrations. 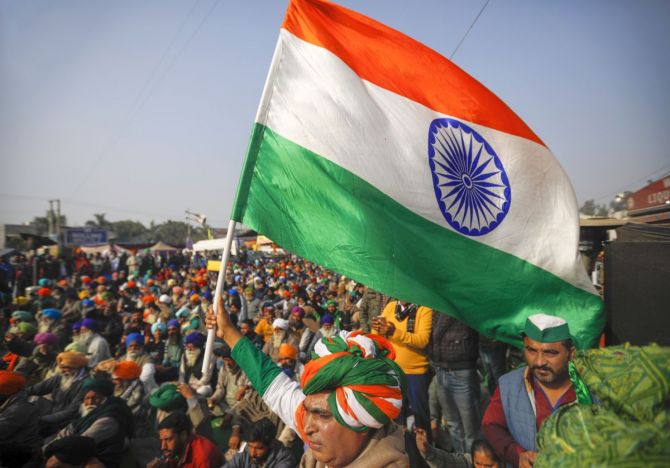 IMAGE: A farmer holds the Tricolor during a protest against the new farm laws at Singhu Border in New Delhi. Photograph: Ravi Choudhary/PTI Photo

"There is no New Year for us until the government accepts our demands," said Harjinder Singh from Punjab's Ropar, who has been camping at the Delhi-Haryana border since November 25.

In the last round of talks on Wednesday, the government addressed the farmers' concerns over the increasing power tariff and penalties for stubble burning, but that wasn't good enough news to celebrate yet, said the farmers.

Among the issues that continue to remain unresolved are the revocation of the new farm laws and a legal guarantee of the minimum support price for their crops.

"Both the demands that they have agreed to were not laws yet. Their impact was yet to be felt. And we went to the government with the demands with clarity. They cannot pick and choose what suits them. They have to listen to all our demands," said Harmesh Singh, a farmer from Punjab's Hoshiarpur.

"If the government wants to see our strength, we will show them. People like us who are used to living in 'kothis' (bungalows) are now sleeping on the road. We have been protesting peacefully for a month, we can keep protesting for a year too," added Bhupinder Singh, also from Hoshiarpur.

Most farmers this year will be welcoming the New Year away from their families, but they are not complaining.

"Yes, we have a family back home and we are missing them, but this is also our family. All these farmers are our brothers, and uncles,” said Harjinder.

Gurpreet Hayer from Jalandhar and Pratap Singh from Bhatinda have decided to do 'sewa' in the New Year as they had done in the past.

Gurpreet said he will be working with Gursikh Sewa Society to put up a "turban langar" for all the farmers on Friday.

"We will celebrate the New Year by doing sewa. There are many farmers who don't know how to tie a turban, or don't have a fresh turban. We will give them that,” he said.

Pratap said he would pay a visit to the Bangla Sahib Gurudwara here on the first day of the year.

"Every New Year we go to pay our respects at gurudwara and do sewa at langar. This year too, I will do the same here,” he said.

Among the bare minimum celebrations, the Working People's Charter has called upon people from across the country to usher in the New Year with the farmers.

"These laws are not just anti-farmer but also anti-poor. And we want all the people who go out to celebrate New Year to come and celebrate with the farmers, with the aim of demanding social justice for them. There will be bonfire, good conversations and songs of revolution," said Nirmal Agni from Working People's Charter.

Farmers have been protesting at Delhi borders against the Farmers (Empowerment and Protection) Agreement of Price Assurance and Farm Services Act, 2020; the Farmers Produce Trade and Commerce (Promotion and Facilitation) Act, 2020; and the Essential Commodities (Amendment) Act. 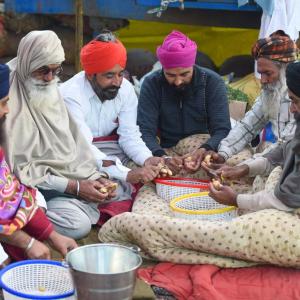