The Centre on Friday told the Supreme Court that probe into assembly of people at Anand Vihar Bus Terminal in east Delhi and at Tablighi Jamaat event in Nizamuddin Markaz is being conducted on day-to-day basis by the Delhi police and there was no need for a Central Bureau of Investigation probe.

The ministry of home affairs gave in detail the steps taken by the Delhi Police which is making all efforts to complete the investigation within the time frame to submit the charge sheet in the trial court.

A bench of Chief Justice S A Bobde and Justices A S Bopanna and Hrishikesh Roy allowed the petitioner Supriya Pandita to file rejoinder affidavit to the reply of ministry of home affairs and listed the matter for further hearing after two weeks.

Pandita in her plea had sought various reliefs including CBI probe into the matter related to the assembly of people at Anand Vihar Bus Terminal and Markz in Nizamuddin after nationwide lockdown was announced alleging that Delhi police has failed to control the people and the Nizamuddin Markaz chief Maulana Saad was still evading arrest.

Detailing the steps taken by Delhi police, the ministry of home affairs in its affidavit said that investigation in Markaz matter is being conducted on a day-to- day basis, in accordance with the mandate of law and all efforts are being made to finalize investigation and submit a report under section 173 CrPC (chargesheet) before the trial court in a time bound manner.

“In view of the facts and circumstances it is respectfully submitted that prayer D (direction for CBI probe) of the writ petition does not merits any consideration by this court,” the reply affidavit said, adding that plea needs to be disposed of.

Detailing the sequence of events, the MHA said that Maulana Mohd Saad and others had allowed a huge gathering to assemble inside a closed premise, over a protracted period of time, without any semblance of social distances or provision of masks and sanitizers and have caused a situation where a highly infectious disease such as Covid-19 may spread and threaten the lives of inmates.

It said that inspection of Markaz was conducted by SDM (Defence Colony) on various dates between March 26 and March 30 and during such inspection around 1300 persons from various States as well as foreign countries were found residing in the premises without maintaining any social distance with each other.

“It is submitted that Maulana Mohd Saad, others and the management of Markaz had deliberately, wilfully, negligently committed acts which were in direct contravention and to the lawful directions of the government and public servants…”, the affidavit said.

It added that a case was lodged against Maulana Saad under various provisions including The Epidemic Disease Act, Disaster Management Act and sections of IPC crime branch police station and during the investigation of the case charges under Foreigners Act was also added. 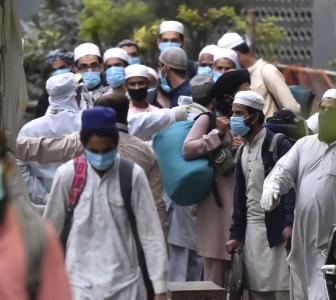