I don't approve of conversion for marriage: Rajnath

From the standoff with China to the government’s response to the farmers’ protest, Defence Minister Rajnath Singh holds a freewheeling talk. 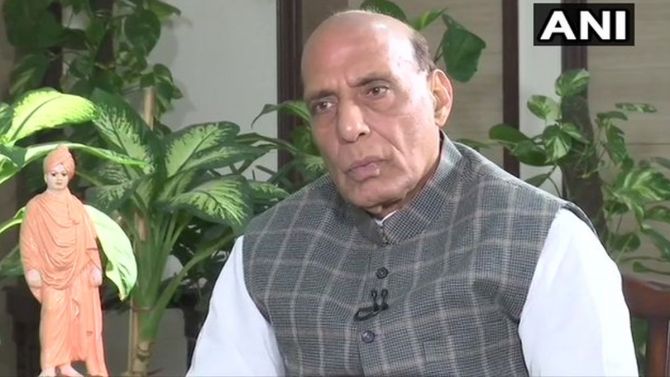 Backing the "anti-conversion" legislation brought by Uttar Pradesh government, Defence Minister Rajnath Singh on Wednesday said that he personally does not support conversion for marriage.

"I want to ask why there should be a conversion. The practice of mass conversions should stop. As far as I know, in the Muslim religion, one can not marry someone from another religion. I personally do not approve of conversion for marriage," Rajnath Singh said.

He was responding to a question about the misuse of "love-jihad law" enacted by the Uttar Pradesh government.

He said there is a difference between "natural marriage" and forceful religious conversion for marriage.

"In many cases, you may have seen that the religious conversion is being done forcefully and sometimes it is done under greed. Natural marriage and forceful conversion for marriage has a big difference and I think governments which made these laws have considered all these things," he added.

Answering a query, he said a true Hindu will not practice discrimination.

"I believe that a true Hindu will not do discrimination based on caste, religion and sects. Our religious scriptures also do not give permission for this. India is the only country that has given the message of "Vasudhaiv Kutumbakam" (The whole world is a family). No country did this," he added.

The Uttar Pradesh government has enacted a law to prohibit fraudulent and forcible conversions, including conversion for marriage.

The Madhya Pradesh government has also approved the Freedom to Religion Bill 2020.

Union Defence Minister on Wednesday said that no "meaningful solution" has come out of diplomatic and military level talks with China to resolve the standoff on the Line of Actual Control in eastern Ladakh and there is "status quo".

In an exclusive interview with ANI Editor Smita Prakash, the defence minister said that if status quo continues, there cannot be a reduction in the deployment of troops.

Rajnath Singh referred to the Working Mechanism for Consultation and Coordination meeting on India-China Border Affairs held virtually earlier this month and said the next round of military talks can take place anytime.

"It is true that in order to reduce the standoff between India and China, talks were taking place on a military and diplomatic level. But no success has been achieved so far. There will be a next round of talks on a military level which can take place anytime. But no meaningful outcome has come and there is status quo," he said.

"If there is status quo, it is natural how deployment can be reduced. There will be no reduction in our deployment and I fell their deployment will also not come down. I don't think that status-quo is a positive development at all. Talks are on and they result in a positive outcome, that is our expectation," he added.

He said hotline messages have been exchanged.

"On what issues talks will be held, an exchange of messages is taking place between the two countries," he said.

The external affairs ministry had said after the WMCC meeting on December 18 that both sides agreed to maintain close consultations at the diplomatic and military level.

It said they agreed that the next (ninth) round of senior commanders meeting should be held at an early date so that both sides can work towards early and complete disengagement of troops along the LAC in accordance with the existing bilateral agreements and protocols, and fully restore peace and tranquility.

Hitting out at Rahul Gandhi over attacks on the government over farm laws, Defence Minister Rajnath Singh has said that he knows more about agriculture than the Congress leader as he was born in an agriculture family to a farmer-mother and Prime Minister Narendra Modi was also born in a poor family.

He said that the agriculture laws were in favour of farmers and talks should not be held with "yes or no" mindset.

The defence minister said that farmers should hold clause by clause talks on the three laws and the government will make amendments if there is a need to do so.
Rajnath Singh, a former union agriculture minister, said the government is totally sensitive towards farmers and the poor of the country and "their pain is our pain".

He said the government cannot take decisions which are not in the interest of farmers. "Rahul ji is younger to me and I know more than him about agriculture. Because I have been born from womb of a farmer-mother. I am the son of a farmer and we cannot take decisions against the farmers. Our Prime Minister was also born from the womb of a poor mother. I want to say this only and there is no need to say anything else," Singh said.

He was asked about Rahul Gandhi meeting President Ram Nath Kovind and presenting a memorandum with over two crore signatures for repeal of three farm laws.

The minister said there have been attempts by "some forces to create doubts in the minds of farmers regarding the farm laws".

"We are trying to remove these doubts. We have talked to many farmers and humbly, I want to say it again that talk with government clause by clause on the law. I think talks should not be held in 'yes' or 'no'. There should talks based on logic. If the government realises that there is a need to do amendment in any clause, it will do that," he added.

He appealed to farmers of Punjab not to vandalise communication towers.

"It should not happen. I think farmers of Punjab should think about it. If anyone is involved in this, then it should be stopped," he said.

On farmers being called ‘Naxals’ and ‘Khalistanis’

Noting that farmers are "annadatas" and "backbone of the economy," Defence Minister Rajnath Singh on Wednesday strongly disapproved of remarks such as "Naxals" or "Khalistanis" in the context of protesting farmers and said "allegations should not be made by anyone" against them.

The minister said that the farm laws have been made in the interest of farmers and the protesting farmers should see their implementation for two years.

He said the government was "pained" by the protest by farmers.

Asked about "Naxals" or "Khalistani" remarks made in the past in the context of protesting farmers, he said such allegations should not be made.

"These allegations should not be made by anyone against farmers. We express our deepest respect towards our farmers. Our heads bow in deference and respect towards our farmers. They are our 'annadatas'. In the time of economic recession, the farmers have borne the responsibility of taking the economy out of trouble. They are the economy's backbone. They have taken the country out of troubled waters on several occasions," Singh said.

He said the government was working for the poor and marginalised sections of the society.

Singh said the government has been working to boost the income of farmers through the farm laws and the Prime Minister was concerned about the issue before the 2014 election campaign.

"The fact is that the three farm bills have been made keeping the interests of the farmers in mind. Being one of the senior-most members of the cabinet, I have had the opportunity of interacting with PM Modi on several issues, I have seen that he has expressed concern on the farmers' issues. Even before the 2014 election campaign, he had the thought of doubling the income of farmers," Singh said.

He said the government has repeatedly said that Minimum Support Price will continue.

"How will we renege on our promises? If leaders renege on promises in a democracy then the people punish them under this system. We are striving to increase the income of farmers," he said.

He said Prime Minister Narendra Modi was pained about the farmers' protest.

"There is no question of being insensitive as far as the subject of farmers is concerned. Our farmers are holding demonstrations and I am not the only one pained. Prime Minister Narendra Modi is pained as well."

He said the Sikh brothers have sacrificed a lot for national security and the country will not forget that.

"The Sikh brothers have always protected the culture of the country. Their contribution will always be remembered for protecting the country's self-respect. There is no question on their integrity.”

On Canadian PM Trudeau’s remarks on the farmers’ protest

"India is not any other country that someone can say anything," he added.

He was asked about criticism in some countries and Trudeau's remarks concerning protest by farmers on farm laws.

He said attempts had been made to mislead "our farmer brothers" and the same thing is going on.
Trudeau had expressed concern about the farmers' protest in India against three farm laws.

Speaking during a Facebook video interaction organised by a Canadian MP to mark Gurupurab or the 551st birth anniversary of Guru Nanak, Trudeau had said Canada will always be there to defend the right of peaceful protest.

Some lawmakers in the US also voiced their support for farmers agitating in India against the new farm laws.

India had called the remarks by foreign politicians on protests by farmers as "ill-informed" and "unwarranted" saying that the issue pertains to internal affairs of the country. 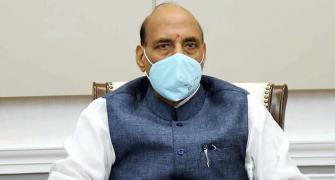 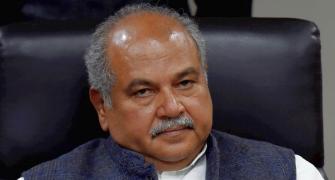 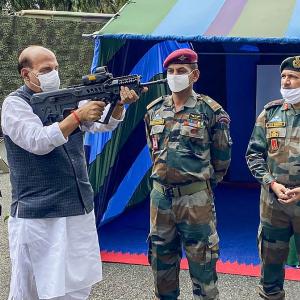 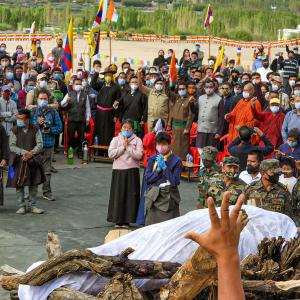