The Supreme Court Tuesday stayed the Allahabad high court order directing the Uttar Pradesh government to impose strict restrictions till April 26 in five cities due to the surge in COVID-19 cases. 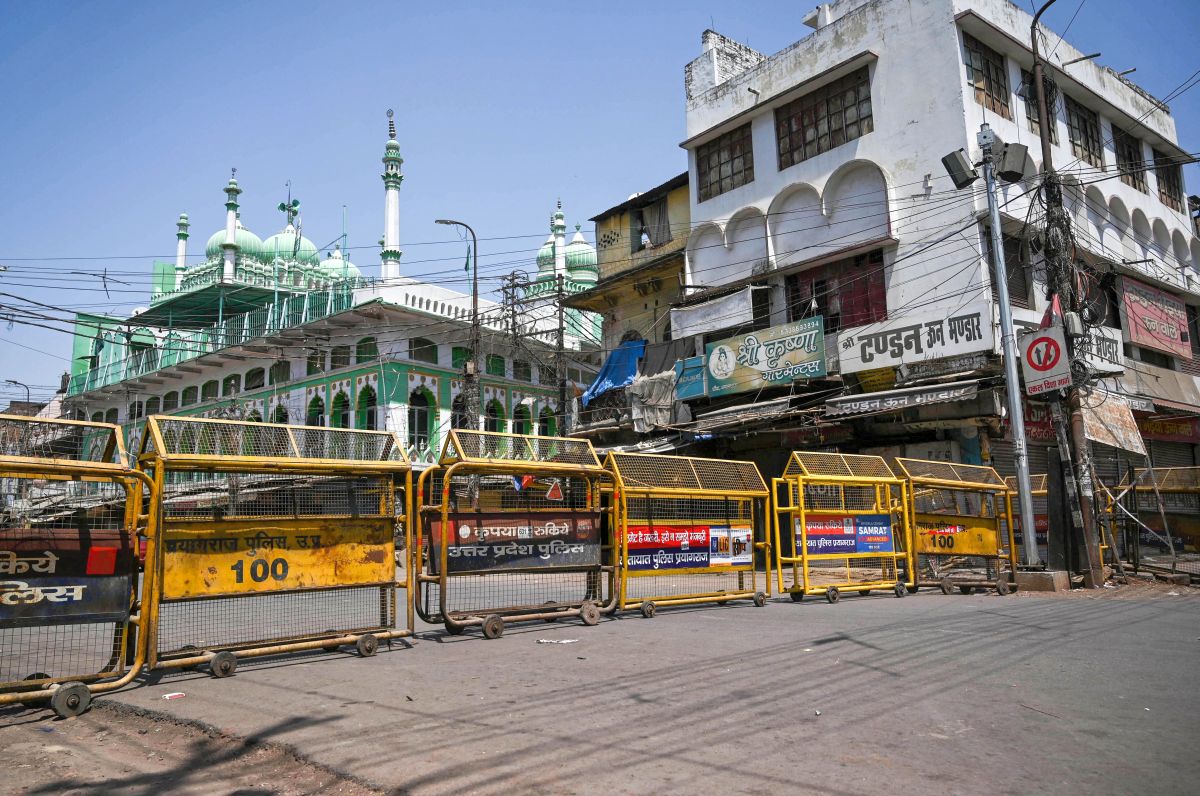 IMAGE: Police barricade near Jama Masjid in Prayagraj as the UP government imposed Sunday lockdown in states in the wake of rising Covid-19 cases across the country. Photograph: PTI Photo

A bench headed by Chief Justice S A Bobde passed the order after Solicitor General Tushar Mehta, appearing for Uttar Pradesh, said the state has issued several directions to contain the spread of coronavirus but to “lockdown five cities by a judicial order may not be the right approach”.

Mehta, while arguing that the high court order would create “immense administrative difficulties”, said the state government has taken adequate precaution and actions at its own.

“Issue notice. Until further orders, there shall be an ad interim stay of the impugned order passed by the high court,” said the bench, also comprising Justices A S Bopanna and V Ramasubramanian.

“However, the petitioner - state government shall immediately report to the high court about the steps it has taken and proposes to take in the immediate future within a period of one week in view of the current pandemic,” the bench said in its order.

The top court appointed senior advocate P S Narasimha as amicus curiae to assist in the matter and posted it for hearing after two weeks.

The bench directed the apex court registry to forthwith furnish a copy of the petition, filed by the Uttar Pradesh government challenging the high court's Monday order, to the amicus.

The high court had directed the Uttar Pradesh government to impose strict restrictions including closing of malls, shopping complexes and restaurants till April 26 in five cities -- Allahabad, Lucknow, Varanasi, Kanpur Nagar and Gorakhpur -- but stopped short of calling it a "complete lockdown".

At the outset, the bench told Mehta that the high court cannot be arrayed as a respondent in the petition.

Mehta said that it was a “serious mistake” as the petition was drafted overnight and requested the bench to allow him to delete the name of high court from the array of parties in the matter.

“Prayer is allowed. The name of respondent no.1 (high court) is deleted from the array of the parties,” the bench said.

During the arguments, Mehta said, “Several directions have been issued, some of which the state has already taken steps, but to lockdown five cities by a judicial order may not be the right approach”.

The bench noted the submissions of Mehta who said that the state has issued several directions to contain the spread of coronavirus.

“He (Mehta) further submits that the directions issued by the high court vide the impugned order are as rigorous as a lockdown though the high court has observed that ‘they are nowhere close to a complete lockdown',” the bench noted in its order.

When the bench said the state shall report to high court about the steps which it has taken and proposes to take on the issue, Mehta said the government can also apprise the apex court about it.

In its petition filed in the apex court, the state government has said, “though the intention behind the impugned order passed by the division bench is both laudable and salutary, however, the high court has completely failed to appreciate that while passing the direction of the nature as quoted above the high court has effectively encroached upon the executive domain and has passed a mandamus which is incapable of being executed at the present stage, and if executed, is capable of creating panic, fear and law and order situation in the state”.

It said the modalities which need to be worked upon before imposing a lockdown or curfew essentially fall within the domain of executive.

The plea, drawn by advocate Rajat Nair, said there was no empirical data before the high court to compel it to arrive at a conclusion that lockdown/total curfew for a week was to the only way to break the chain of COVID-19 infection.

“In absence therefore, it is axiomatic that the solemn consideration behind passing of the said order was an irresistible belief of the court that imposition of lockdown was the only way to break the chain of infection,” it said.

Earlier in the day, the apex court agreed to hear the plea of the Uttar Pradesh government against the high court order after the state requested for urgent listing of the matter.

The high court had slammed the state government for "not planning" for a second wave of the pandemic, and criticised the State Election Commission for holding the panchayat elections at this time and "exposing" poll officials to the threat of virus.

It had also directed the government to "consider imposition of a complete lockdown in the entire state for at least two weeks".

Reacting to the order, the UP government had said there would be no "complete lockdown" in the cities for now.

The high court had said if people are restrained from going out of their homes for a week in the first instance, the current chain of spread of the COVID-19 infection can be broken.

“Accordingly, we are passing the directions in respect of cities of Prayagraj (Allahabad), Lucknow, Varanasi, Kanpur Nagar and Gorakhpur and we direct the government to strictly enforce them forthwith," it had said.

"All establishments be it government or private, except financial institutions and financial departments, medical and health services, industrial and scientific establishments, essential services including municipal functions, and public transport, shall remain closed till 26th April, 2021. The judiciary will, however, function on its own discretion," the high court had said.