No jail for Tamil journalist arrested for 'damaging' references to Guv

In an embarrassment for Tamil Nadu police, a well-known editor of a vernacular weekly was arrested on Tuesday on a complaint from Raj Bhavan over articles that allegedly disparaged Governor Banwarilal Purohit but walked free within hours after a court rejected the police’s plea for his remand. IMAGE: Senior journalist R Gopal, who heads the Tamil weekly magazine Nakkheeran, surrounded by lawyers, supporters and media personnel as he is being taken to court, in Chennai. Photograph: PTI Photo

R Gopal, the editor of Tamil magazine ‘Nakkheeran’, who had written articles on a sex scandal involving a woman college teacher, was picked up by police from the airport before he could board a flight to Pune, officials said.

As he walked free from police custody, Gopal thanked the court and the media fraternity for “standing by freedom of expression and freedom of press”. He also thanked political leaders including Dravida Munnetra Kazagham president MK Stalin for support.

Gopal was arrested under Section 124 of the Indian Penal Code which relates to “assaulting President, Governor etc with intent to compel or restrain the exercise of
any lawful power”.

Gopal’s advocate said application of Section 124 was challenged in a city court where he was produced after arrest.

“An assault on the governor has two sides. One -- use of force; two -- stop him from discharging his duties. If force were to be used, they should have met at the same place. It has not been mentioned in the complaint how the governor’s duties were affected,” Gopal’s counsel later told reporters.

He said the magistrate accepted the contention and rejected the police’s plea for remand.

Veteran journalist and former Editor-in-Chief of The Hindu N Ram also presented his views before the court deprecating the use of Section 124 in Gopal’s case.

“This release is a great hope for freedom of expression and freedom of press. Nakkheeran’s work will continue,” Gopal, who got huge media attention when he successfully negotiated the release of Kannada film superstar Rajkumar, held captive by forest brigand Veerappan in 2000, told reporters.

Rajkumar was released after spending 108 days in captivity after several rounds of talks by Gopal in the forests where Veerappan’s writ ran large.

Tuesday’s police action followed a complaint from Raj Bhavan over publication of a series of articles in Nakkheeran related to an assistant professor of a private college who allegedly asked girl students to extend sexual favours to university officials in return for marks and money.

Assistant professor Nirmala Devi, who taught at the college in Aruppukottai affiliated to the Madurai Kamaraj University, was later arrested.

The scandal came to light in April this year after an audio tape of a purported conversation between Nirmala Devi and some students surfaced.

Governor Purohit had rejected the professor’s claim which she purportedly made in the audio tape about knowing him and having access to him. Purohit insisted he did not know her.

The governor also ordered an inquiry by a retired IAS officer into the scandal in his capacity as the chancellor of universities.

Gopal’s arrest was condemned by the principal opposition party DMK and other political outfits which alleged an “undeclared emergency” prevailed in the state.

Senior Bharatiya Janata Party leader and Union Minister Pon Radhakrishnan, however, claimed there was a “conspiracy” to falsely implicate the governor in the sex scandal as several politicians feared their career could be doomed if the entire
truth came out.

DMK chief MK Stalin, who met Gopal at the hospital where he was taken after arrest, sought withdrawal of the case and his immediate release.

The Madras Reporters Guild, Madras Union of Journalists and the Chennai Press Club condemned the arrest as “reprehensible, undemocratic and against the canons of free speech and expression”.

Vaiko, who was denied permission to meet Gopal at the police station where he was kept, staged a dharna against police action.

He was detained and moved to a marriage hall before being let off later in the day. 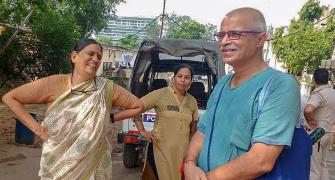